Like so many others, cartoonist Alex Gruss woke up one day to find a Citi Bike rack installed outside his Clinton Hill home. He wasn't thrilled about seeing Citibank's logo plastered around his historic neighborhood, but he did try to find an inventive way of fighting it: By placing a sculpture among the blue bikes, as a statement against corporate advertising. 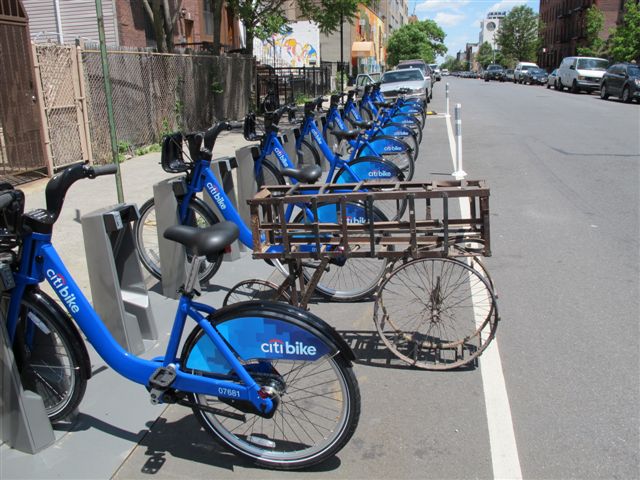 Gruss conceptualized the piece, which was creator by sculptor Jack Jano. "I celebrate the idea of saving energy and bicycle riding but I am outraged by the fact that a huge conglomerate has been invited to advertise themselves on every corner of New York City," Gruss wrote in an email. "That's what I tried to convey when coming up with the idea of mixing the art piece with the Citibank bicycles."

By the looks of it, riding that thing may still be easier than pedaling a Citi Bike.

#art
#citi bike
#cycling
#original
Do you know the scoop? Comment below or Send us a Tip
A new Gothamist is coming! We’ve moved comments over to our beta site. Click here to join the conversation and get a preview of our new website.