The key moment in Sully, Clint Eastwood's fractured dramatization of the Miracle on the Hudson, comes through a subtle visual strategy late in the film. Chesley "Sully" Sullenberger and the rest of an investigative committee watch simulations of pilots attempting alternative flight plans of U.S. Airways Flight 1549 try safe emergency landings back at LaGuardia or Teterboro airports. Eastwood shoots these simulations from the pilots' backs with eyes and faces entirely hidden from the camera's view, their monotonous voices characterizing their robotic nature.

After Sully, embodied by a muted Tom Hanks, discusses the role of "the human factor" that led to his decisions, the film flashes back into the cockpit, where he and first captain Jeff Skiles (Aaron Eckhart) make the fateful decision to land 155 souls in the belly of the Hudson River.

Both Hanks and Eckhart eschew any dramatic enunciation or gestures, despite the harrowing circumstances. But the camera now moves alongside their faces to capture the almost molecular moments of panic, calculation, fear, bravery, and ultimately heroism in their faces and movements. The film never defines the human factor that led to the Miracle on the Hudson, but it does its best to witness to it.

As a cabbie remarks early on in Sully, the event in January 2009 became a breath of fresh air during a time of worldwide crisis that briefly united New Yorkers. While most of us never witnessed the moment, the feelings of heroism that lingered in its wake created a euphoric sensation. But Eastwood has made a filmmaking career out of complicating our ready-made heroes: skirting the cliched sports narrative in Million Dollar Baby, revealing a militaristic sadism in American Sniper, or even turning a genre about effortless pleasure into strained work in Jersey Boys.

Instead of opening on a heroic moment, the film begins with Sully in crisis as he loses control and his plane crashes into the heart of Midtown Manhattan. When he awakes from his nightmare, a silvery sweat covers his face, revealing his intense vulnerability (thanks in part to DP Tom Stern's shadowy foregrounds).

Never one to play coy with the dramatic and thematic tensions of his stories, Eastwood's film (written by Todd Komarnicki) tracks the immediate investigation following the landing. In an early sequence, the National Transportation Safety Board, headed by Mike O'Malley and Breaking Bad's Anna Gunn, assert that various computer models will show that Sully's actions actually endangered lives. Trapped in silent hotel rooms, the blinding lights and constant buzzing of Midtown West, and a photo-hungry media, Sully waits out the moments during which he contemplates his actions to discover whether he deserves the label of a so-called "hero." 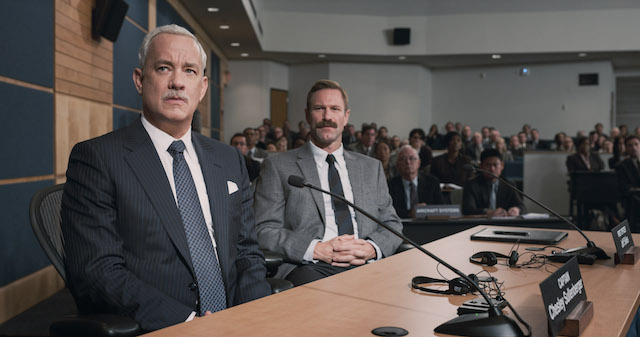 Shot almost entirely in IMAX, Eastwood uses the format less for grand spectacle than a series of loose compositions in the square-ish 1.9 aspect ratio, close to Classical Hollywood's 1.34 box. In an era that often defines its best filmmakers by their virtuoso camerawork and intensely rigorous framing, Eastwood is a filmmaker who allows actors to define their spaces. His shots rarely announce themselves, as the Steadicam prowls with a loose flexibility to search for details of the characters' psychology through physical details.

Even in his most action-oriented films like Unforgiven and The Eiger Sanction, Eastwood has always undercut basic movie pleasures. The dramatic spectacle of the plane itself plays out in fragmented moments, first experienced through the air traffic controller, then by the rescuers (emphasizing the teamwork ethos of New York's Finest), and finally within the cockpit.

Eastwood never exploits the tension, and the film's brief introduction to some of the passengers plays to human details instead of laborious dread. While the special effects of the plane might feel a bit plastic, the ordinary look inside of the cabin as the Hudson's chilly water rushes in creates a dramatic authenticity, with the digitally recreated skyline adding to the resonating energy (the rescue was shot on Universal Studios' Falls Lake).

In lieu of heroism, Eastwood has created a film of simple people doing simple things, dramatic conflict sketched in brief sequences in a kaleidoscopic fashion—though one wishes Laura Linney as Sully's wife Lorraine got more to do than worry over the phone. At the heart of the film is Hanks, who has magnetized all his external charm into a quiet, forceful reserve. He reduces his signs of stress down to a few small twitches of a thumb, only once caught in close-up, while his matter-of-fact tone and stares create a chameleon-like feeling of heroism's elusive nature.

As he's evolved into a dramatic actor, Hanks's comic background has trained him to create sudden ruptures of rhythm to change the entire perspective of a character. In a moment near the end, Hanks nods his head over to his co-pilot, an almost amused characterization that suggests something intangible about the character that we can only witness, and thus empathize with the real consequences of becoming a legend.

Sully opens everywhere on Friday. We recommend seeing it on IMAX.

Peter Labuza is a freelance film critic, whose work has appeared in Variety, Sight & Sound, and The A.V. Club. Follow him on Twitter.