On Saturday night, an out-of-place LED highway sign sat on the Rockaway boardwalk flashing a series of dire warnings and unexpected axioms: "Climate Change At Work"; "Abolish Coal-Onialism"; "Fossil Fueling Inequality." The messages alternated every few seconds between English, Spanish and Russian, and they attracted a bit of confused attention from passersby at Beach 94th Street—adjacent to the 11-block stretch of shoreline closed to the public due to beach erosion earlier this summer.

At around 10 p.m., I watched as a group of teenagers spilled out from an end-of-season party at Rippers to congregate in front of the odd sign, snapping photos and responding to some of the more urgent declarations—like "50,000,000 Climate Refugees"—with cries of "Oh, shit!" I eventually worked up the nerve to approach them and ask if they knew who was responsible (DOT road sign hacks aren't uncommon, or particularly difficult), but was probably a bit too accusatory about it, because they looked at me like I was a cop and walked away.

My apologies to the Rockaway teens. The signs, it turns out, are not a hack, but part of a multi-site public art project spearheaded by the Mayor's Office and the Climate Museum. For the last month, the "Climate Signals" exhibition has featured 10 solar-powered signs spread out across the five boroughs, with the goal of forcing New Yorkers to think and talk about climate change. Each piece was designed by artist Justin Brice Guariglia, who is also currently participating in Storm King's sprawling climate change exhibit. 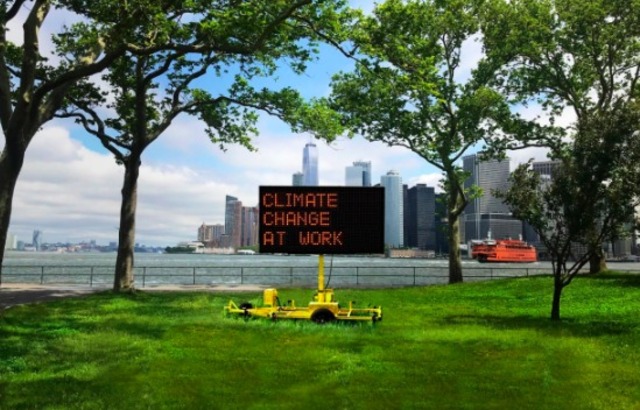 A rendering at the Governors Island exhibition site (via Mayor's Office)

"We're trying to get people to think more ecologically with these little haiku-like messages that reconnect you with the reality of climate change today," Guariglia told Gothamist on Tuesday. "We see these road signs and immediately pay attention, and we want to make people discuss things that are inconvenient to talk about."

The ten sites were picked by the Parks Department to specifically emphasize an area's vulnerability to climate change. In addition to the Rockaway boardwalk, other signs can be found in Flushing Meadows-Corona Park in Queens; St. Mary's Park and Hunts Point Riverside Park in the Bronx; Pier 84 and St. Nicholas Park in Manhattan; Sunset Park in Brooklyn; and Snug Harbor in Staten Island.

On Saturday, the signs will be staffed by NASA scientists who can answer New Yorkers' questions about climate change, thanks to a partnership with the Center for Climate Systems Research at Columbia's Earth Institute/NASA Goddard Institute for Space Studies.

And until the end of the month, Governors Island's Admiral House—the temporary home of the Climate Museum—will also feature an interactive exhibit allowing visitors to create their own "climate signals."

"Climate change is one of New York City’s greatest challenges and requires creative approaches to educate and engage all of us about its risks and solutions," said Daniel Zarrilli, New York City’s chief resilience officer. "Art can play a valuable role in this effort.”