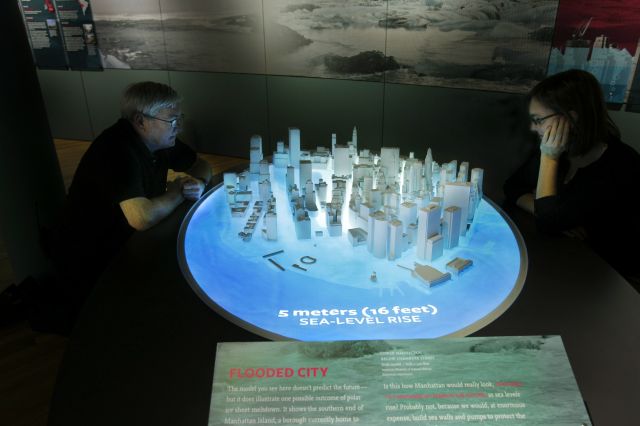 Photo of the model of New York City by AMNH/D. Finnin.

Opening this Saturday and running through next August at the American Museum of Natural History, it's: Climate Change, The Threat to Life and A New Energy Future! Uplifting, no? The exhibit "will examine one of the most pressing scientific issues of our time—the massive, human-induced warming of Earth, a phenomenon that could lead to drought, rising sea levels, heavy storms, and other events with potentially dire impacts on the health of society and the natural world."

Spoiler Alert? New York City isn't invincible, and one activity will let visitors "investigate raising the sea levels on a dynamic scale model of Lower Manhattan to graphically illustrate the flooding that would be caused by the melting of ice sheets and warming of oceans." Curator and Princeton professor Michael Oppenheimer told the NY Post that "The scenario of a flooded Manhattan is unlikely to ever occur...because the city would have ample time to build higher seawalls and pumping systems." But let's not get to that point, 'kay?

#american museum of natural history
#amnh
#climate change
#exhibit
Do you know the scoop? Comment below or Send us a Tip