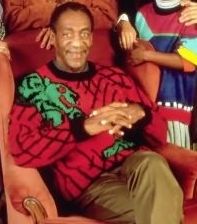 This is way better than the Tony Soprano wardrobe auction, now you can be the proud owner of an authentic Cosby sweater! Just in time for Father's Day, too. USA Today reports:

Cosby's daughter, Evin, said her mother and father were cleaning out a closet recently when they came across a batch of the sweaters her dad wore when he played Huxtable on NBC's The Cosby Show from 1984 to 1992.

"I pounced on these sweaters," she said Thursday, adding she figured they could help a charity named for her brother, Ennis, raise a substantial amount of money.

Three of the sweaters are up on the block on eBay starting June 2nd (minimum bids will be set at $5,000!), with proceeds benefiting educational programs via the Hello Friend/Ennis William Cosby Foundation. The non-profit is named for Cosby's son who was murdered in 1997; at the time he was attending the Teachers College at Columbia University.

The sweaters became the trademark look of Dr. Huxtable, but became known as "Cosby sweaters" nonetheless. The family resided in a brownstone at the fictional 10 Stigwood Avenue in Brooklyn Heights (the exterior of the Huxtable home was actually at 10 St. Luke's Place near 7th Avenue in Greenwich Village); maybe a sweater will make it back to the borough.