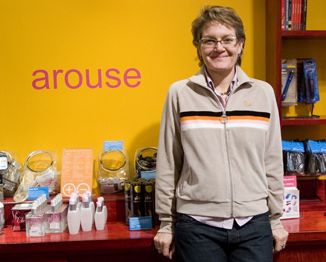 This year sex shop Babeland celebrates its 15th year, and its 1st Brooklyn store. Claire Cavanah is the co-owner, but she's also a Park Slope mom...so naturally the borough's first Babeland is landing right in her own nabe. So far the neighbors have greeted them with an unexpected level of excitement, and today the Park Slope outlet of Babeland will finally open its doors. Recently Cavanah told us about the shop's history, the neighborhood-specific events planned and what products she think will fly off the shelves in the Slope.

Babeland turns 15 this year, where was your first shop in New York, and how did people react when it came to the neighborhood? Our first location in New York opened in 1998 at 94 Rivington Street on the Lower East Side. We had a warm welcome in the neighborhood from the LES Business Improvement District, other merchants and residents. We were a little nervous about the synagogue across the street, but it turned out to be a nice relationship. We were committed to being good neighbors and fitting into the community. There was only one incident about a window display. The Rabbi complained because it contained boxer shorts. We took it down.

How has the Park Slope reaction been pre-opening? It’s been very friendly. I think the comments on blogs and message boards have been a good gauge of resident’s feelings and it’s been overwhelmingly positive. People on the block have been stopping in to say hi as we’ve been working on the store these past few weeks, I couldn’t have asked for a warmer welcome.

Will the Park Slope store differ from other Babeland stores in any way? No, same great selection and customer service. As we meet more of our customers, we’ll tailor the selection to what they want. Our program of events will be more neighborhood-specific, though. We’re doing more social events- Babeland Brunch once a month, crafting, date night, wine and chocolate tasting- and a monthly series focused on what it means to be a sex-positive family with guest speakers. It’s an intimate space, conducive to interactive, informal events. In addition, we’ll offer some of our most popular workshops, like How to Please Your Man.

Do you have any stand-out crazy customer stories? Well, there was a guy whose fetish was to dress as an infant who would come into the store once a week. He would wear a cloth diaper, suck on a pacifier and clutch a rattle. He would look at all the merchandise, read the books, just hang out. I guess he felt comfortable in the store.

What's the oddest request for something you've gotten at the store? Tickle Me Elmo. During the craze when there was more demand than supply, we’d get literally dozens of phone calls every day in the last two weeks before Christmas. Desperate parents just seeing the word “toy” and calling us.

What product do you expect to be popular in the Slope store? Do different boroughs have different sexual personalities? I’m not sure if it’s possible to make certain judgments because New Yorkers do their shopping in so many different neighborhoods. For example, the SoHo location gets a lot of tourists and Upper West Siders and the Lower East Side location gets a lot of Williamsburg and local shoppers.

I expect the We Vibe, the first vibe that can be worn by a woman during intercourse, and the Eco-Delight Kit, which features a uniquely designed vibe with an ergonomic handle, will be hot in Brooklyn.

Which New Yorker do you most admire? Bette Midler, she’s so cool and does great projects that make New York a better place to live for everyone.

Given the opportunity, how would you change New York? Bikes only in Manhattan.

Under what circumstance have you thought about leaving New York? If the seas rise as high as predicted from global warming and Red Hook is underwater.

What's your current soundtrack to the city? Dolly Parton

Best venue to see music. The bandshell in Prospect Park during Celebrate Brooklyn.

#Babeland
#Claire Cavanah
#interview
#park slope
#sex shop
#sex store
Do you know the scoop? Send us a Tip
A new Gothamist is coming! We’ve moved comments over to our beta site. Click here to join the conversation and get a preview of our new website.