CitySol Steps on their own Carbon Footprint? 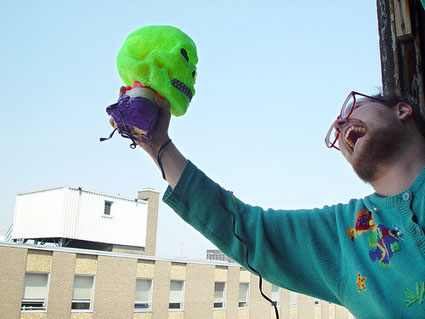 At this year's CitySol event, which took place over the weekend, Baltimore resident Dan Deacon (pictured) was set to perform after making a last-minute announcement following another New York show last week. BrooklynVegan notes that Deacon was a no-show, however, "thanks to some airline screwup that sent his equipment to Cincinnati." See, in order to play the solar-powered show, Deacon had to first unleash no small amount of greenhouse gas. After playing McCarren Pool last Thursday, Deacon flew to Atlanta Friday, only to have to turn around and fly back to New York for Saturday's show.

Interesting that CitySol and Solar1 would greenlight the performer given that his appearance would only create more carbon dioxide. Perhaps the Buy Local mentality should also apply to booking shows...Book Local? We asked the CitySol folk about the situation and they said that while they didn't know he had a performance in Atlanta in between the two New York shows, they "knew he was leaving town and flying back for the gig" a few days beforehand. Maybe they bought some carbon offsets to make up for it.

They also noted that they're considering doing another show later this year, which would include Deacon.

#air travel
#carbon footprint
#CitySol
#dan deacon
#environment
#event
#flying
#Solar1
Do you know the scoop? Comment below or Send us a Tip