Earlier this week, it was announced that Disney would move out of its Upper West Side space and head downtown to the area that become known as Hudson Square (or West SoHo to others). Disney's new home will take up an entire block—from Varick to Hudson, and from Vandam to Spring—leased for 99 years at $650 million from Trinity Church. In turn, the church is letting the media conglomerate demolish all the buildings to build a 1 million-square foot complex.

Among the tenants in the existing buildings is beloved venue City Winery, which opened up in 2008 at the corner of Varick and Vandam. But don't worry: City Winery founder and CEO Michael Dorf says they are starting to look for new spaces.

"This is not unanticipated," he told Gothamist this morning. "When we signed our lease ten years ago there was a discussion and a clause about what would happen if they were to demolish the building. It foretold of the future."

He added, "Trinity Church has been a good landlord and communicating with me about what was happening over the last couple of years. It was not a surprise at all. No one anticipated Disney to consummate the deal so quickly."

Trinity Church is a major real estate presence downtown; the church "was granted 215 acres of land here by Queen Anne in 1705" but is now down to 14 acres and a number of commercial buildings. 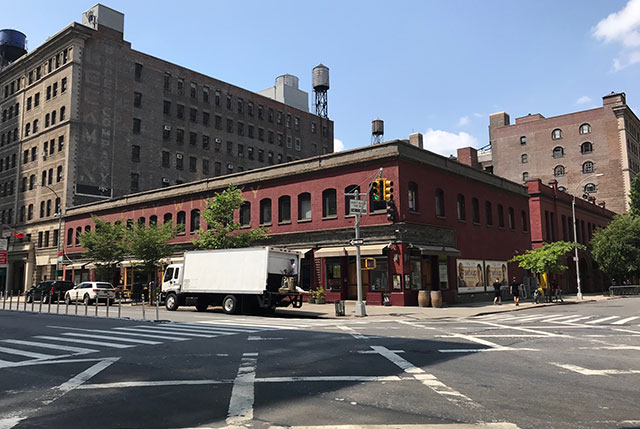 The corner of Varick and Vandam (Jen Chung / Gothamist)

Dorf has been looking for alternatives in the neighborhood and other appropriate parts of Manhattan over the past six months, "[The Disney deal] happened faster than everyone thought, but we're still looking at a January 1st, 2020 move, which gives us more than enough time to find new location."

Asked if City Winery would relocate to another borough, Dorf said he's committed to keeping it in Manhattan. "There's a lot of great cultural activity, especially in Brooklyn right now, but it's harder to be in Manhattan, in terms of finding space, and there's something about that challenge and those barriers to entry that make us a rare and unique venue once we've made it through those barriers."

Approximately half of the wine served at City Winery is produced on site, using grapes imported from Argentina, Chile, Oregon, Washington and California. About 80 tons of grapes are brought in seasonally, and Dorf plans to continue that production at the new location.

"I'm more than okay. I'm super excited. What's hard to understand is that when I opened this concept in New York ten years ago, no one had done a music venue/winery in Manhattan. Since then, I've been able to build six of them around the country. Each of those spaces is bigger and better than the one I've done in New York, and I've learned a lot. So for me the idea of moving into a new location is really exciting because I'm going to be able to take those ten years of experience combining a working winery with a restaurant and music venue in the middle of Manhattan, and make what will be our ultimate flagship."

Disney sold its UWS real estate (except for the ESPN Armory) to Silverstein Properties for $1.155 billion, but will lease back the space "for up to five years while it draws up plans for the downtown complex, demolishes the existing buildings at Hudson Square and erects a new home," according to the NY Times.

In a separate press release, Dorf said, "We hope to work with [Trinity Church] to find a suitable location given their substantial property holdings. Trinity, and now Disney, has continued to express that City Winery is a significant cultural asset to the neighborhood and would like us to stay in the area." He also took a shot at another building in the neighborhood, the Trump SoHo Hotel that's now known as the Hotel Dominick, "It is inevitable in a city like New York that 2-story buildings will eventually yield to taller ones. It is unfortunate to see historically significant 120-year-old brick-and-beam gems get swapped for 50-story generic glass towers. The character of the neighborhood changed when Trump’s tower went up. It is my hope that the design of this new Disney building — and the millions of square feet Google is adding to their office — will be a positive addition to the dynamism of our vibrant community."