New York City's cultural history includes a staggering array of musical talent, but only a handful of musicians get their names on street signs.

In its final meeting of the year, the New York City Council voted 48-0 to honor three music icons in their home boroughs: famed hip hop artists Biggie Smalls/Notorious B.I.G. (a.k.a. Christopher Wallace) and the Wu-Tang Clan, as well as folk singer Woody Guthrie.

Christopher Wallace Way would be located on St. James Place, between Fulton Street and Gates Avenue in Brooklyn, the same block where the late rapper Biggie Smalls grew up. The street co-naming was spurred on by local culture advocate LeRoy McCarthy, who was also a driver behind the newly named Wu-Tang Clan District, located at the southeast of Vanderbilt Avenue and Targee Street in Staten Island. There’s no present name for that location.

McCarthy told Gothamist today, "I'm happy that NYC officials are finally giving the city's indigenous 'Hip Hop' music the respect and recognition that it deserves. It took a long time and lots of hard-work to advance the Christopher Wallace Way & Wu-Tang Clan District street co-naming, but ya know what, Hip Hop Don't Stop." 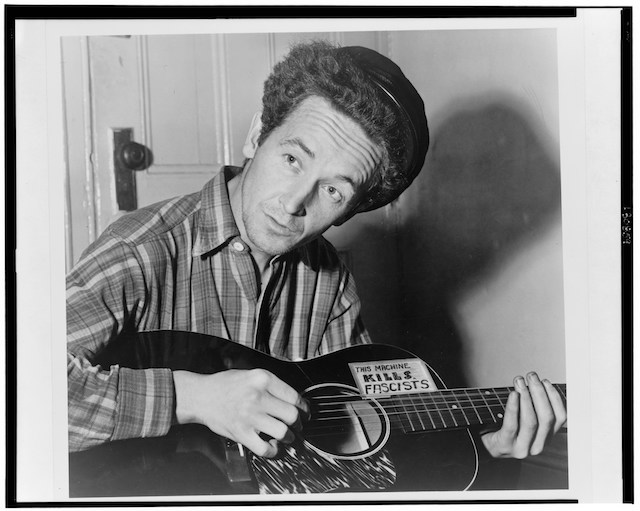 Woody Guthrie with his "This Machine Kills Fascists" guitar. (Shutterstock)

And in a nod to the city’s folk tradition, Woody Guthrie Way would be located on Mermaid Avenue between West 35th and West 36th streets in the Coney Island section of Brooklyn, where the singer moved with his wife in 1943.

Altogether the Council voted on 68 street co-namings Thursday for a total of 164 this year. Mayor de Blasio must sign-off on the bills to make them official. Want to see who the city has honored for their impact on the city’s cultural, political and economic life in past years? Check out this map.

A post shared by Christopher Wallace Way (@christopherwallaceway) on Dec 20, 2018 at 4:25pm PST