Christie's and the Bogus Basquiat 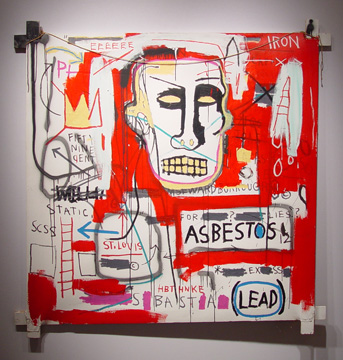 One would think that dropping some serious cash at a high end auction house would be a safe bet. Today it's being reported that an art dealer in Chelsea did just that and ended up with a counterfeit piece! Christie's is now being faced with a $7 million lawsuit that charges them with knowingly selling the art dealer a fake Jean-Michel Basquiat painting. Page Six reports:

Tony Shafrazi, who was Basquiat's primary dealer, says he bought the 1982 untitled piece from Christie's in 1990 for $242,000, and resold it a year later to collector Guido Orsi.

In his suit filed this month in Manhattan Supreme Court, the Iranian-born dealer, who has a gallery on West 26th Street, claims Christie's knew the painting was a fraud - having been told so earlier by the artist's Haitian father, Gerard Jean-Baptiste Basquiat - but sold it anyway.

The Brooklyn-born artist's pieces are worth a lot these days, and recently an untitled 1981 work sold at Sotheby's for $14.6 million. The case arose after a Basquiat authentication committee rejected the piece...so we sort of wonder if they got some ideas from the Warhol committee.

Photo of a Basquiat piece sold at Christie's (via).