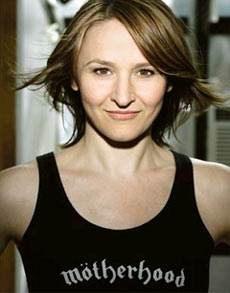 Tell me about BabyLove. The show is an honest look at motherhood and sexuality. It grew out of an essay I wrote in a class with essayist Phillip Lopate, who was very helpful to me, while I was getting my MFA in Nonfiction at The New School. I was going through all of these changes sexually and had a hard time talking about it, even with my amazing Williamsburg mommy friends. Since I’m a writer and reader, I turned to books, and I found so little out there that I just wrote from my own experience.

The show is really sexually explicit, can you talk about that? It is explicit, but not for the sake of being sexually explicit. My goal is to be sexually honest. When my essay appeared on Nerve.com it received a record amount of reader feedback (everything from "Thank you for telling it like it is!" to "Someone should take that woman's baby away from her!"). The subject matter covers everything from trying-to-get-pregnant sex to trying to find time to masturbate with an infant around – and then getting interrupted by the Fed Ex man when you finally do – to first postpartum sex and the eroticism of breastfeeding, and beyond.

I feel it's important to talk about motherhood and sexuality. We are a sexually open society yet there are still so many things that retain that Puritan influence and remain taboo. The deep changes to women’s sexuality that happen when we become mothers is rarely discussed. The What to Expect series that is most women's Bible has a few mentions like "Some women find breastfeeding arousing" or "If you find yourself getting aroused while playing with your toddler seek professional help immediately" and that’s it. And there are huge grey areas and overlaps of love and sex and intimacy. That’s the territory I set out to mine.

You’ve been doing the show since 2005. How has it changed? How do you keep the show fresh? We premiered the show at the end of 2005 in Ljubljana, Slovenia at the National Theatre of Slovenia. The President of the country came! It was amazing. The tech manager told the director, the wonderful Julie Kramer, “The audience, you know, they will not laugh.” But they did, and they kept laughing and then they got silent and I always say that’s when we knew we had a good thing on our hands. We were a hit in Ljubljana! Many of the same stories are in the show. We redo the ending for every run to keep it up to date with my current situation. The ending is in constant flux. For one whole run, we rewrote the ending every night, that was wild.

BabyLove is your second solo show. How did you get started doing solo work? I was an actor/waiter for many years, and I started publishing my work after I was interviewed in the New York Observer and the reporter did everything he could to make me look like a ditsy actress. I decided that if was going to talk about sex it was going to be on my own terms. Anger is a great motivator. So I started publishing personal essays in the NYPress, and then Julie Kramer helped me turn a series of these essays into my first solo, which was called “17 Guys I Fucked.” It was a coming of age story. It was a lot of fun. I still have a lot of affection for that show, though at the time I didn’t have enough confidence to send it around. Now I’m super lucky to be a part of the Hourglass Solo Lab, where I have a community of women writer/performers with which to workshop my stuff once a month.

Can you sum up your work? I try to expose emotions that are not routinely expressed, those in-between areas. I often use myself as the extreme example in which I hope others can see a bit of a universal experience. My writing is frequently autobiographical and sexual, yet it is concerned with examining the areas where we are all trying to connect. I feel like the work is ultimately about exploring the nature of love.

Who are your role models and inspirations? When I came to New York, Holly Hughes and Karen Finley and Lucy Sexton were doing amazing work downtown and I was so inspired by them, but I wound up on a more traditional theater path. Partly because of my boyfriend at the time who was an actor and he was older and successful and we would work together and I was 20 and, you know overly influenced by him, like you are when you’re 20. Then I did a lot of experimental plays downtown in the '90s at SoHo Rep, Here, Nada, Theatre for the New City, storefronts and basements. I remember seeing Eric Bogosian’s Sex, Drugs and Rock and Roll at the Orpheum Theatre and going to the Holiday Cocktail Lounge afterwards and staying up all night talking and thinking about it. It was so exciting and sexy, but I was interested in telling women’s stories.

Right now I’m inspired by being pregnant. It’s putting a deadline on my current projects! And clearly I’ve been inspired enough by motherhood to write a play about my experience of it. My list of who inspires me is long: Debbie Harry, video artist Eija-Liisa Ahtila, the Guerilla Girls, Miranda July, writer Vivian Gornick, writer Joan Didion, writer David Sheilds, actor Veanne Cox, burlesque star Julie Atlas Muz. And my husband and son; they make so many things possible for me.

Describe your perfect New York Day. Sleep late, read the Sunday Times in bed, have sex, shower, go to a gallery/museum and then have lunch and wine somewhere cozy, go to the playground, go swimming, see a play, have a few cocktails and a late dinner, go dancing, fall into bed and have sex again. Clearly this is not possible because in this fantasy day I only see my son at the playground. Also I’d have to carry my swimming stuff around with me all day, and that wouldn’t be perfect.

What’s the best place to have sex in New York? Wow. Ummm….Years ago, I had a wonderful roll in the grass on a hill in Central Park near the Dairy House. It was one of those perfect days, and it was with the man I’m married to now, so I love that. Movie theatres and bars, restaurant bathrooms (a friend recently recommended DuMont’s bathroom), Tompkins Square Park, back in the day. Well all of this is back in the day, now I’m happy to do it half asleep under the covers.