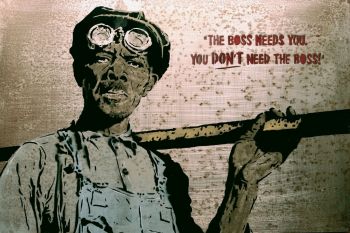 Recently street artist Chris Stain has been pasting up his art around town with Swoon. He says that in 1984, he was one of the "kids who became infected by graffiti's bold colors, striking form, and independent nature." Decades later he looked at his own work, describing it as a direct reflection of his surroundings -- "the people, neighborhoods, and struggles, that are swept along with the every day lives of the common American." Still in town and putting up work that he feels fits into the city's individual neighborhoods, we asked him a few questions about his art.

Photo of a Chris Stain piece by Sam Horine.

Can you discuss the racial politics of graffiti and street art-- do you think it's true that old school NYC graffiti is more diverse racially than street art, which is mostly white art students? It sure seems that way doesn't it?

What informs your choice of subjects? Where I'm from in Baltimore and the working class people that i grew up around. those two elements have shaped me and what comes out of me in the form of self expression. I want my work to be true to who i am as a person. I heard a great quote today by a jazz musician who said "You gotta blow your own horn. you can't blow somebody elses."

How do you pick the spots where your pieces go up? I like walls that are already interesting. that have some texture to them or are in a location that the image has something in common with. I try to be sensitive to neighborhoods and put something there people can relate to.

Where do you think the streetart scene is going? Down the drain...I don't really think about it. I just think about what kind of images I am going to do next and when I'm going to get the chance to work and put them up.

You sell your work as well, is this something you've always done? I was offered my first show in 2000. I started cuttin in 98. Before that I was writing graffiti and nobody was really interested. Selling the work helps out with the bills and taking care of my kids.

What other cities do you like to work/put things up in? I don't have a preference. Anywhere is just fine.

Which New Yorker do you most admire? The Algonquin people who originally inhabited "New York." They respected the land and new how to take care of it.

Given the opportunity, how would you change New York? I don't think I can answer this one. I have enough trouble tryin to figure out how to change the things I need to change in myself let alone consider a whole city or state.

What's your current soundtrack? Today I listened to John Coltrane. Next up "Kind of Blue" Miles Davis.

Best cheap eat in the city. Dumpster behind whole foods.

Best venue to see music. The other night i was comin out of Daredevil Tattoo and there on the corner of Ludlow and Houston was a lone sax player with his tip jar. The way the traffic, sirens, and voices accompanied his melody couldn't be beat. I also like the guys who play the buckets down in the subway. I like the element of surprise and finding good music out on the street.

#Chris Stain
#interview
#street art
#street artist
Do you know the scoop? Send us a Tip