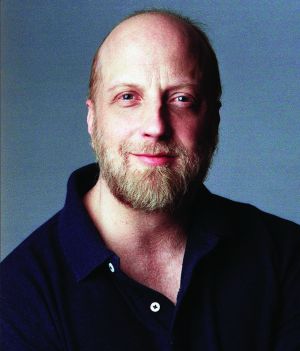 During the 80s golden era of Late Night With David Letterman, Chris Elliott was one of the people most responsible for the show's distinctively bizarre style. Playing characters like "The Guy Under the Seats" and "The Regulator Guy," Elliott's contributions were sometimes hilarious and sometimes baffling, but always memorable for their absolutely unadulterated weirdness. He went on to cultivate his peculiar "Chris Elliott" persona in cult classics like the TV show Get a Life and the infamous box office flop Cabin Boy, as well as supporting roles in other movies ranging from Manhunter to There's Something About Mary. Lately, Elliott has been turning his hand to what he calls, in quotes, "novels". His third and most recent book, Into Hot Air: Mounting Mount Everest

, is a characteristically zany story about a protagonist named Chris Elliott who leads a team of celebrities – Michael Moore and Lauren Bacall among them – in a disastrous expedition up the world's highest peak.

What’s the closest you’ve come to climbing a mountain? Buying climbing gear and putting it on around the house and climbing the back of my sofa.

You live outside of the city. Don’t you do any sort of outdoorsy stuff with your family? No, I am basically a shut in. I watch them outside having fun.

Have you heard from any of the celebrities who you included in your fictional expedition? No, I haven’t. The choice of these people was basically because these books take about a year to write and I wanted to be around characters that I like. I think I’ve met everybody once, except for Kirsten Dunst, and I know they all have a good sense of humor so hopefully they’ll enjoy it.

You named one of the characters after your collaborator Adam Resnik, right? That’s right!

Has he read the book? No, Adam has a really short attention span. He can read the acknowledgements and that’s about it. I put him in all my books.

And does he have any idea that he’s in there? I tell him and he thanks me and he’ll even say, “Yeah, I read it, it was funny.” But I can tell he hasn’t read it.

What about Jon Krakauer? I heard early on that he had heard about the idea and thought it was funny. It’s not a straightforward parody of Into Thin Air, although the title might infer that. It’s more or less using Everest and the action-adventure genre as a backdrop for my goofiness.

There are a lot of really wild ideas in it, like the Dalai Lama invading China. Where do these ideas come from? I keep CNN on in the background when I write and whatever is in the news ends up in my books. Honestly they come as I’m writing; I didn’t start this book thinking the Dalai Lama was going to invade China but halfway through I thought, “Okay, that’s where that storyline should end up.” And a lot of people have told me that when you write these things you really shouldn’t plan too much out and I don’t. I kind of know where things are going to end up and what the beginning is but I try to let the book let it write itself.

What’s your daily writing regimen like? I start really early in the morning and work until the afternoon. Later I go back and take a look at what I’ve done and delete it all and start over the next day.

Do you ever call people up and get feedback on the book while you’re working on it? Occasionally I’ll send out a chapter to somebody but for the most part I’ll just let my wife read the rough drafts of the chapters as I sit in the other room and listen to whether or not she’s laughing. That’s my gauge.

Have you considered adapting this or The Shroud of the Thwacker

into movies? Well, that’s why I put myself into these books. Just in case. But no, I’m not the hottest commodity in the film industry these days. I do think visually when I write these things and I suppose if I was at the point in my career where I could make movies, these are the kinds of movies I would make. There’s certainly a bit of Cabin Boy in both books.

When writing books do you miss the collaborative process of working with other writers like Adam Resnik? Oddly enough, I like doing the novels by myself because it’s fun coming down to my office and just sitting and letting whatever crosses my mind just happen. I do miss working on Get A Life and Letterman – before the writers’ strike I had started going back there and doing stuff with Gerry Mulligan there and having a great time. Hopefully after the writers’ strike ends I’ll be going back to do some more there.

Are you already starting the next novel? I have an idea but I haven’t tried to sell it yet because I’m still sort of formulating it. These things take a long time to write and right now it’s actually not a bad time for me to be doing it because I can’t really develop anything in television because of the strike.

You live in Connecticut – have you been commuting into the city to picket? Yeah, I’m like an hour and a half away. I try to get in like once a week to picket.

What’s your guess on how much longer this is going to last? I have no guess. It’s a really contentious strike at this point. The last one in ’88 lasted like five months. It looked somewhat hopeful when they went back to the table but now it’s supposedly not looking that great. You never know. It’s a rollercoaster.

If for some reason you couldn’t play yourself in a Chris Elliott biopic, who would you like to see cast as you? Paul Giamatti or Mark Hamill.

Were you working on Letterman when Crispin Glover was on the first time in 1987? [Laughs.] Yeah.

What do you recall about it? I remember being backstage at the time, and Bob Morton was the segment producer. And the whole thing was a surprise to him as well. I just remember Bob Morton’s words when he saw Crispin Glover getting ready to walk out after being announced, which was, “What’s with the wig?” But before he could stop him he was on his way out.

What’s the most remarkable fan interaction you’ve had? I’m amazed at these book signings that I do that people bother to show up dressed as Chris Peterson from Get a Life. There was one I did in Santa Cruz for The Shroud of the Thwacker and I was halfway through my reading and suddenly like twenty people stood up and they had made homemade Zoo Animals on Wheels masks. They stood up and started singing the tunes from Zoo Animals on Wheels. I was blown away. I just couldn’t believe they had taken the time to do it and come in with the masks hidden. Besides knowing the lyrics they had taken the time to go to a crafts store and get various items to make these beautiful masks.

And it’s funny because I loved Get a Life and so many people talk about it and yet at the other end of the spectrum Fox is completely oblivious to its virtues. Fox still doesn’t mention it much. And it’s a whole different crew that was there when we did Get a Life. But at the time they hated the show. It’s weird. Nowadays people come up to me and they tell me how much they love that show. And if you just went by the way people talked about it you’d think it was a signature Fox show at the time, like Married with Children and In Living Color. But we were only on for a season and a half. And it was actually a perfect Fox show but it was not the show that they wanted so they killed it.

What was their big problem with it? They didn’t understand it at all. They wanted me to do a straightforward sitcom. They were kind of trying to move away from things like Married with Children. I remember someone telling me that what they had wanted from me was the next Cosby Show. Why they had come to me for that I had no idea but that’s what they were hoping for. And what they got was pure insanity. We had arguments with them on just about every episode over specific jokes and characters; they wanted people to be real. They were constantly trying to get a “real” moment between me and my dad on the show. So we would write something in where I would hug him and they would say great, but then when we shot it we would add in some joke about me smelling his ear at the same time and just totally kill the moment.

What’s the latest news on the Get a Life DVD? I have no idea. I don’t know what’s holding it up. I know Sony has it, but your guess is as good as mine.