Chris Cornell, the charismatic frontman for Soundgarden and Audioslave, died at age 52 on Wednesday, May 17th, in Detroit. His death is reportedly being investigated as a suicide.

Cornell was with Soundgarden for a performance in Detroit. According to WXYZ, "Sources confirm to 7 Action News that Cornell died at MGM Grand Detroit following a show at the Fox Theatre... Police say Cornell's wife called a family friend and asked him to check on his well-being. The friend forced open the hotel room door and found Cornell on the bathroom floor, according to police. We're told Cornell was pronounced dead on the scene."

Cornell's representation issued a statement, "Chris Cornell passed away late Wednesday night in Detroit, MI. His wife Vicky and family were shocked to learn of his sudden and unexpected passing, and they will be working closely with the medical examiner to determine the cause. They would like to thank his fans for their continuous love and loyalty and ask that their privacy be respected at this time.” 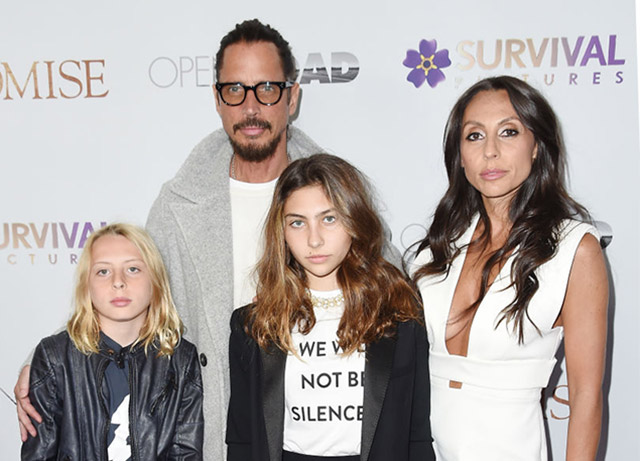 Chris Cornell and his family attend the New York Screening of 'The Promise' at The Paris Theatre on April 18, 2017 in New York City (Getty Images)

Seattle native Cornell co-founded Soundgarden in 1984, and the band became emblematic of the "Seattle sound" grunge movement, along with Pearl Jam and Nirvana, in the early 1990s. Variety has a good distillation of Soundgarden's rise to success: "The band’s sound, a then-unusual fusion of garagey indie rock with a slightly sarcastic take on the stadium-rock (Aerosmith, Kiss) that its members grew up on, found an audience as the band toured extensively." The publication also recalls the band's concern with "the optics of signing with a major label too quickly" and Cornell's creation of Temple of the Dog:

Several key events took place in 1990 and ’91 that profoundly shaped the band’s career. First, in April 1990, Mother Love Bone singer Andrew Wood — a close friend and former roommate of Cornell’s — died of a heroin overdose just weeks before the band released its promising debut album. As a way of grieving, Cornell united with Cameron, Mother Love Bone members Jeff Ament and Stone Gossard (both of whom had been in Green River) and a promising young singer named Eddie Vedder whom Ament and Gossard were considering for their next band. The resulting album, “Temple of the Dog,” was released rather quietly on A&M in mid-1991, but took on a whole new dimension when Pearl Jam — the band Ament, Gossard and Vedder went on to form — Nirvana, and the entire Seattle scene vaulted into the mainstream the following year.

Next, Soundgarden released “Badmotorfinger,” which showed vast maturity in both the band’s performance and, via songs like “Rusty Cage” and “Outshined,” its Cornell-driven songwriting; the album was nominated for a Grammy Awards (albeit for Best Heavy Metal Performance) the following year. And in 1992, just as the grunge wave was cresting, came the Cameron Crowe-directed film “Singles,” a celebration of Seattle’s scene and sound, which starred Matt Dillon and Bridget Fonda and featured many characters from the area’s rock world. Soundgarden performs in the film and appears on the soundtrack, yet perhaps its most memorable moment in the film comes when Dillon and Cornell briefly groove together to music; Cornell’s presence actually outshines that of the far more famous actor. The film’s soundtrack, which was certified platinum at the time by the Recording Industry Association of America (RIAA), just last week received a deluxe reissue featuring several rare and previously unreleased tracks, including Cornell’s rare solo “Poncier” EP. The group was a highlight on the second Lollapalooza tour in 1992, which also featured Pearl Jam.

Cornell, who boasted a nearly four-octave range, started a solo career in 1998, but later would form Audioslave with Tom Morello of Rage Against the Machine and reunited with Soundgarden in 2010.

“What I look forward to the most...is the camaraderie. It’s what we missed when we weren’t a band.” - @chriscornell pic.twitter.com/yMPqJefoGo

The Singles soundtrack is being reissued on May 29th, and members of Pearl Jam and Cornell have been discussing its impact; Cornell said, "Because the film was conceived and shot before the international explosion of all of the bands that ended up being kind of a key factor in what was referred to as the Seattle scene and the Seattle movement."

.@MikeMcCreadyPJ on 'Birth Ritual' from the soundtrack to Cameron Crowe’s ‘Singles,’ in stores May 19. https://t.co/ARHNmubJE9 pic.twitter.com/BjKbn844Ku

Cornell openly discussed his past struggle with addiction; in 2015, he told Rolling Stone:

[N]ow not only do I expect to be here, and I’m not going anywhere, but I’ve had the last 12 years of my life being free of substances to kind of figure out who the substance-free guy is, because he’s a different guy. Just by brain chemistry, it can’t be avoided. I’m not the same, I don’t think the same, I don’t react the same. And my outlook isn’t necessarily the same. My creative endeavors aren’t necessarily the same. And one of the great things about that is it enabled me to kind of keep going artistically and find new places and shine the light into new corners where I hadn’t really gone before. And that feels really good. But it’s also bittersweet because I can’t help but think, what would Jeff [Buckley] be doing right now, what would Kurt [Cobain] be doing right now, what would Andy [Wood] be doing? Something amazing, I’m sure of it. And it would be some music that would challenge me to lift myself up, something that would be continually raising the bar so that I would work harder too, in the same way they affected me when they were alive basically.

In a conversation with the Tampa Bay Times last year, Cornell discussed the overdose deaths of celebrities, "What ends up happening with musicians and actors is, they're famous, so when somebody has an issue, it's something that gets talked about. People die of drug overdoses every day that nobody talks about. It's a shame that famous people get all the focus, because it then gets glorified a little bit, like, 'This person was too sensitive for the world,' and, 'A light twice as bright lives half as long,' and all that. Which is all bulls---. It's not true."

Cornell had lamented about the state of current music trends in 2012, "They’re making music on iPhones. Everything’s fractured. The reason there’s no modern day Shakespeare is because he didn’t have anything to do except sit in a room with a candle and think."

#audioslave
#chris cornell
#grunge
#seattle sound
#soundgarden
Do you know the scoop? Comment below or Send us a Tip