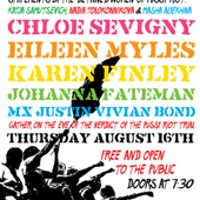 Tonight, on the eve of the verdict in the Pussy Riot trial, Chloe Sevigny, Justin Vivian Bond, and other supporters will gather in New York to read the courtroom statements of the women.

The Breslin Bar and Dining Room in the Ace Hotel is hosting the event, and in addition to the statements, the group will read "selected prison letters and other translated material along with court room attendees written observations."

The event—produced by JD Samson and freepussyriot.org—is free, starts at 7:30 p.m., and will also include readings from Eileen Myles, Karen Finley, and Johanna Fateman. If you can't make it over, they'll be livestreaming it. Then tomorrow, as the verdict is expected to come in, there will be a masquerade protest party and march in Manhattan, starting at 9 a.m. and ending around 2 p.m. in Times Square.

For more on the trial up until now, you can visit our timeline, which tracks the main events from February through early August.

#Chloe Sevigny
#event
#pussy riot
#rally
#reading
Do you know the scoop? Comment below or Send us a Tip