Checking In On McCarren Park Pool 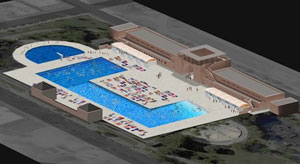 Winter may be creeping up on us but today the Brooklyn Paper takes a look at McCarren Park Pool—formerly a pool, then a concert venue, and now undergoing a $50MM renovation so that it can serve the community as a pool again. It's been nearly a year since Mayor Bloomberg headed to the Brooklyn spot to break ground, so what's been going on since?

Right now the space is filled with dirt piles, concrete slabs and hollowed-out pits, but the trained eye can see what those things will become: a shallow platform with shower fountains, a gym, two Olympic-size pools and a world-class diving area. The renovation is reportedly 1/3 complete, and according to the paper, the project is on track to open in the summer of 2012. Parks Department's Stephanie Thayer told them, “Right now, construction crews are doing exterior brickwork, cleaning stone that will be reused, doing cement work for the pool deck, and patching cement floors and ceiling beams. Interior work and duct work has begun as well as work on the interior steel staircase for the mezzanine.” She also noted that the iconic archway that serves as an entrance of the pool will be restored "to its original character to preserve its historic integrity."