Check Out This Update Of The 'Smooth' NYC Subway Map

Cerovic tells us that his 2014 map was met with "great enthusiasm." So much enthusiasm that he said he "received lots of feedback from people wanting to help me make the map better."

"The two main criticisms were about topology and line colors," Cerovic explained. "People actually didn't bother the absence of accurate geography, they were very pleased with the compact schematic map, but the problem was I had squeezed Brooklyn into the squared layout of the map and hugely distorted its shape with Coney Island ending all the way east at the same 'latitude' as Downtown [Manhattan]. I realized this was unacceptable and I therefore enlarged the layout to be able to fit Brooklyn in a topologically accurate way, on a diagonal axis. It works much better. I also added a schematized coast line all the way to Far Rockaway. Now the map is schematic but also feels like true geography, easy for orientation, easy for use, easy to memorize." 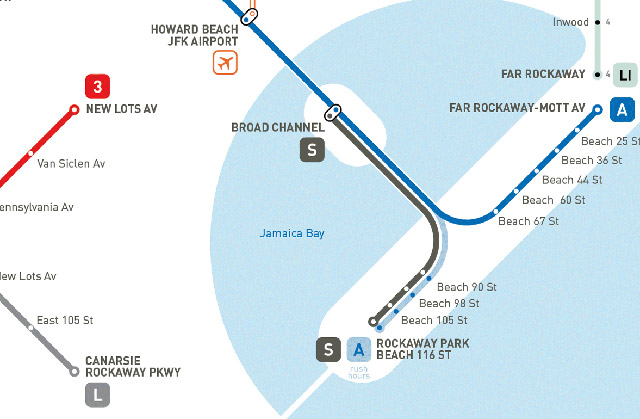 The second issue that he tackled was the subway line colors. "I had made B and D lines magenta to differentiate them from orange F and M lines which share the same route in Manhattan. This was a clearly unacceptable move and so I reverted to portraying all lines with their usual colors," Cerovic said. "Works well now."

Cerovic also added Staten Island, ferries and Newark, plus "fine-tuned all of the areas of the map, especially Manhattan, to make the map beautiful and efficient."

In addition to the NYC map, Cerovic has also designed mass transit system maps for over three dozen other international cities and is offering a bound version of the maps—in a 160 page (high quality kunstdruck matte paper) hardcover book—via Kickstarter.

#brooklyn
#Jug Cerovic
#map
#subway map
#original
Do you know the scoop? Comment below or Send us a Tip