Big changes are afoot for MoMA, which yesterday revealed the renderings for its planned expansion—an expansion that will come at the cost of the 13-year-old American Folk Art Museum.

Working with architecture firm Diller Scofidio + Renfro, the museum is forging ahead with its plans to expand to two sites next door, including three floors of a residential tower at 53 West 53rd Street, and, more controversially, the site of the former American Folk Art Museum at 45 West 53rd Street. The plans include new gallery space on three floors within the tower, and a new building on the site of the former museum. 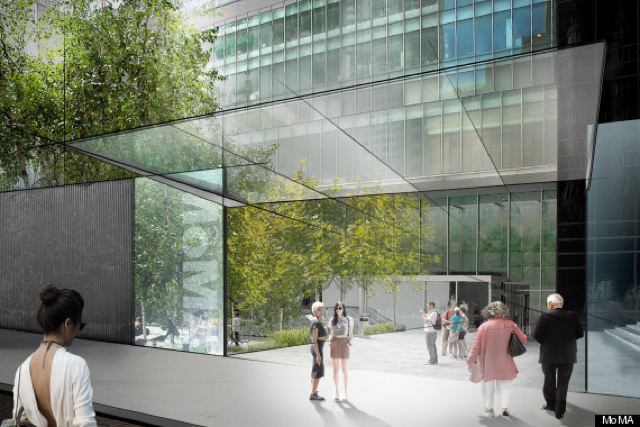 News that the American Folk Art Museum would be lost in the development has been a tough pill to swallow for its fans, though MoMA's architects eventually decided that preserving the building would too drastically impact its architectural strength.

"The analysis that we undertook was lengthy and rigorous, and ultimately led us to the determination that creating a new building on the site of the former American Folk Art Museum is the only way to achieve a fully integrated campus," MoMA director Glenn Lowry said in a statement.

But architect Elizabeth Diller countered the criticism, saying she and her team had dreamed up a variety of alternative uses for the relatively diminutive building, hoping to find a solution to adapt it to MoMA's needs. But in order to preserve it, much of the the building would be lost anyway.

"Here, there's a kind of ethical problem that to save the building…you end up losing so much of it that in the end, the integrity is gone," Diller told the Wall Street Journal.

On the bright side, the newly approved plan calls for a cost-free ground floor accessible to the public, including the sculpture garden. The galleries on the museum's west side will be expanded on the second, fourth and fifth floors, adding a total of 100,500 square feet to the space overall.

#american folk art museum
#moma
Do you know the scoop? Comment below or Send us a Tip