If you're looking for a fun kid-friendly activity, or you're a particularly devoted Happy Gilmore cosplayer, it's a pretty good time to be alive in New York City. Two new mini-golf courses have popped up this summer, including the bells and whistles pirate golf course Shipwrecked in Red Hook, and now Brooklyn Miniature Golf, a simpler, no-frills 18 hole course that has opened in Coney Island.

The course, which is located on Bowery Street and West 12th Street, opened up just over a week ago according to an employee there. While Brooklyn Miniature Golf lacks the flair (and air conditioning) of Red Hook's new course, it makes up for it with the atmosphere, surrounded by the Wonder Wheel, a variety of Luna Park rides, and skee-ball wonderland/Fsociety HQ Eldorado Arcade. 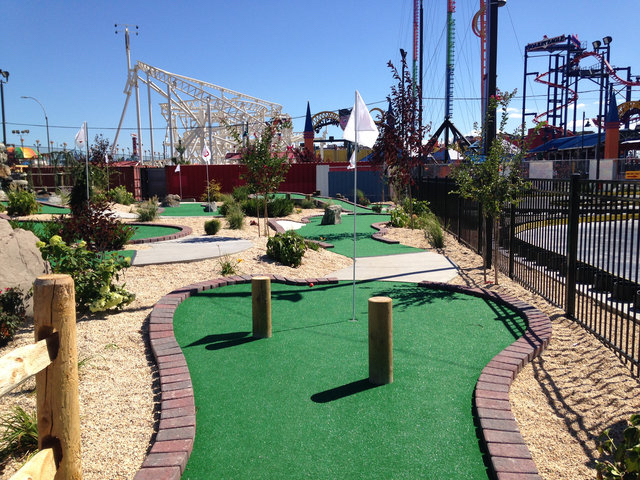 The holes themselves are deceptively hard—or at least they were for me. They're laid out simply, but a few obstacles placed in key spots along the way will have you chewing on your putter in frustration as you continuously tell yourself, "Okay I've got a hole in one on this one, easy," and wind up with a 3 or 4. And the holes themselves seem to be curved just enough on the edges so that every time you think you've sunk a putt, the ball will rim right out.

At the same time, it could just be that I need to put more time in with Lee Carvallo's Putting Challenge if I want to get better at this.

There are also two holes with water traps: one with a small narrow bridge over a river, and the other with a downward-sloping green that will deposit the balls of the careless putters among you right into a small pond. The course was still too new for the pond to have transformed into a golf ball graveyard, but the designers are aware that the slope will claim a number of balls soon enough, and have helpfully left a net out for you right next to the pond so you can fish your ball out. In another nice touch, every hole holds a flag you can pull out after being the first to finish, just like a real golfer (that's what they do, right?).

Brooklyn Miniature Golf opens at noon every day, and currently has no set closing time according to the employee I spoke to. A game will run you $10, for children or adults, and I was told that in "about two weeks" construction on a concession stand next to the course will be finished. There's also a go-kart track right next to the mini-golf, which will run you $15 a session, if you think there are already not enough opportunities to drive fast with no consequences in this city.

#brooklyn miniature golf
#coney island
#lee carvallo's putting challenge
#mini golf
Do you know the scoop? Comment below or Send us a Tip