Amazon, which upended the book publishing industry two decades ago, will open its first of two New York City stores on Thursday, May 25th.

The online retailer's new Big Apple brick-and-mortar presence fills 4,000 square feet at the Time Warner Center; Jennifer Cast, vice president of Amazon Books, heralded it as a "place for discovery" during a preview for the press, as well as some curious mall visitors who were welcomed into the store after wandering in.

The books featured in store are strongly driven by the vast amounts of data that Amazon has collected over the years. Instead of a "Bestsellers" table, there's a "Highly Rated" table with books that have 4.8 (and above) ratings from Amazon customers. One end cap has book club recommendations from Goodreads, while another section features books with 10,000 reviews or more.

"We have this 20 years of information about books and ratings, and we have millions and millions of customers who are passionate," said Cast, who said that their retail strategy was to make the store a "physical extension" of their website.

"All the data is incorporated into store, the reviews, sales... It really is a different way to surface great books," she affirmed, while describing Amazon's statistical approach to retail as "data with heart."

Books that Amazon Kindle users have completed in three days or less are presented as "Page Turners." The majority of books in the store have at least 4-star ratings; exceptions include new authors or new books or other anticipated books on Amazon Wish Lists. "We're letting our customers set the bar," Cast said. 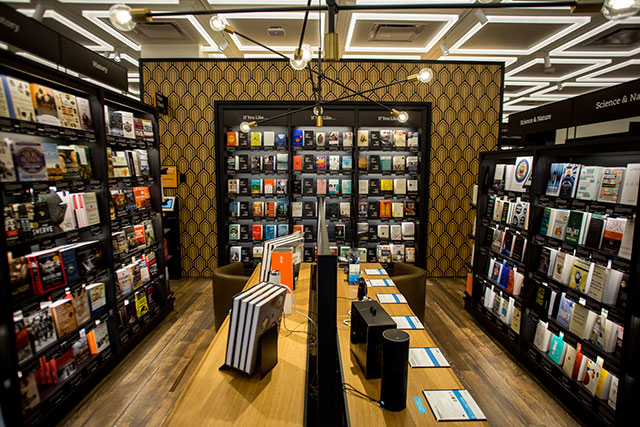 Inside the Amazon Bookstore at Columbus Circle (Scott Heins / Gothamist)

There's also a section "If You Like, You'll Love" that mimics Amazon's "Recommended For You": Popular books, like The Girl on the Train, are situated next to three suggested books, which Amazon employees decide based on sales, similar themes, and other information.

In a twist, all books are shown with their covers face out, so customers can have the opportunity to pick up books that might never have caught their attention if only their spines were shown. If they had decided to put books with spine-out, Cast estimated they would have been able to have 8,000 books in store. Face-out, there are 3,000 books. 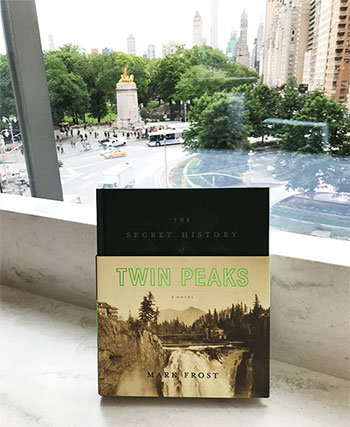 A popular culture book, placed at the window by me (Jen Chung / Gothamist)

No prices are shown for books: Customers can either take books to price scanners located around the store or use their Amazon app to find out the price. Books are sold at either the Amazon price, if you're a Prime member, or list price—and the only way to buy them is either by credit card or using your Amazon app. It was "simpler operationally" to be cashless, Cast said, adding that occasionally there's someone who is upset but, overall, customers have had a positive experience at their other six stores.

The Amazon Books store makes it the first bookstore at the Time Warner Center since the Borders Books closed in 2011 after eight years there. However, the Amazon store size is a fraction of the old Borders (R.I.P. Borders), which covered a sprawling 26,000 square feet, had a cafe, and was located on the second floor directly across from the escalators. Amazon Books is on the third floor and a slight roundabout walk from the main escalators, though it does have window frontage onto Columbus Circle.

There are only a handful of seats (we counted three chairs, a couple kid's stations and some stools) in the store, signaling it's not meant for lingering. The store also has a significant amount of space dedicated to its home products, like the Kindles, Fires and Echoes, so customers can try out the devices.

"I'm happy there's a new store where people can see books and encounter them, but I'd rather we were in there," Book Culture owner Chris Doeblin told the NY Times. "If I had the money, I would go and open a store right next to Jeff Bezos's store." (Book Culture, an Upper West Side independent bookstore chain, is working on a new store in Long Island City, its first outside of Manhattan.)

Overall, Amazon Books feels more like a Hudson Booksellers than other beloved independent bookstores that have quirks or other personal touches. But any bookstore is better than none, right?

The Columbus Circle store is open Monday-Saturday, 10 a.m.-9 p.m. and Sunday, 11 a.m.-9 p.m. Amazon Books will open another store in NYC, on 34th Street across from the Empire State Building, this summer.

#amazon
#Amazon Books
#bookstore
#columbus circle
#time warner center
Do you know the scoop? Comment below or Send us a Tip