It seemed like everyone who was within the city limits decided to take a stroll along the High Line last weekend. The enormous crowds don't always make for a peaceful experience, and they certainly aren't ideal for art viewing. Still, there is an engaging new exhibition in the elevated park—Agora, a site-wide group show that was just installed last week and will run through March of 2019. Which means you have ample opportunity to check it out during off-hours, like weekdays, early mornings, and (because several of the works light up) at night. 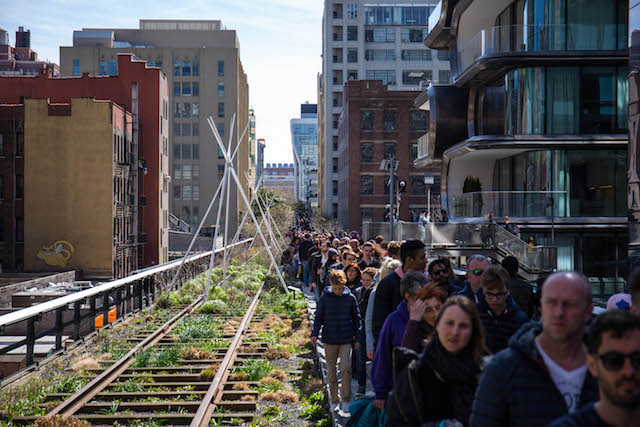 Just a leisurely stroll in the park. (Scott Lynch/Gothamist)

If the above image is scaring you off, here's a look at a few of the exhibition's highlights, all of which in some way explore how art can define, create, enhance, and/or educate within a public space. 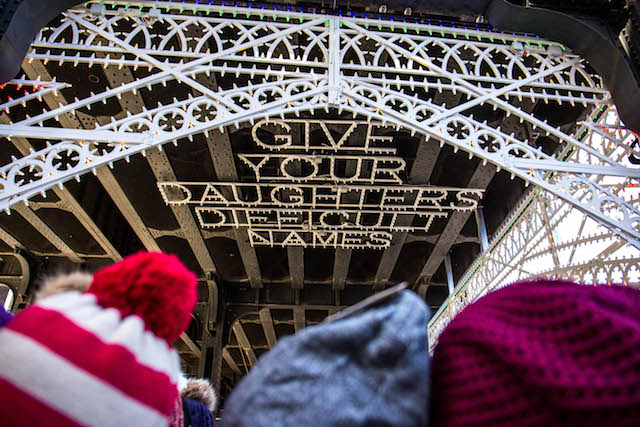 Not part of the Agora show but also new this season is Dorothy Iannone's mural I Lift My Lamp Beside the Golden Door, which is the last line of Emma Lazarus's poem The New Colossus, promising refuge, opportunity, and freedom for immigrants. The mural is located near the lawn at 22nd Street.

And if you need some refreshment while you're up there, the High Line food vendors are all back in business, led by the paletas (ice pops) at La Newyorkina, the empanadas at La Sonrisa, the Venezuelan-style hot dogs at Perros y Vainas, and the ice cream sandwiches at Melt.

#agora
#high line
#public art
#original
Do you know the scoop? Comment below or Send us a Tip