A youthful Jack Kerouac is pictured here in his Naval Reserve "mug shot." The year was 1943 and Kerouac was just 21-years-old; he had dropped out of Columbia University and the U.S. Merchant Marines at this point. Looking back on his time at the latter, OpenCulture notes that Kerouac's motives were personal not patriotic for joining the USMMA in 1942, as he wrote in his journal:

"My mother is very worried over my having joined the Merchant Marine, but I need money for college, I need adventure, of a sort (the real adventure of rotting wharves and seagulls, winey waters and ships, ports, cities, and faces & voices); and I want to study more of the earth, not out of books, but from direct experience.”

By October of 1942 he had left the Merchant Marines, and just a few months later most of the crew of the ship he had been on, the Dorchester, was killed when torpedoed by a German U-boat. Around the same time he joined the U.S. Naval Reserve—on February 26th, 1943 Kerouac was sent to a training station in Newport, Rhode Island, where this photo was taken... but he didn't last there more than 10 days. 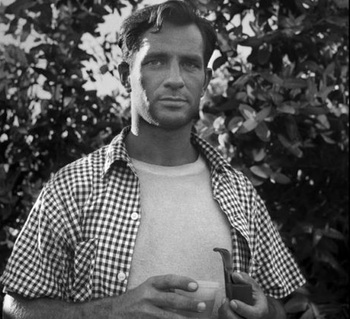 Kerouac aged well, no?
According to files

released by the government in 2005, "he was transferred from the Naval Training Station to the Naval Hospital in Newport because he had numerous headaches and 'appeared to be restless, apathetic, seclusive. [And a] neuropsychiatric examination disclosed auditory hallucinations, ideas of reference and suicide, and a rambling, grandiose, philosophical manner.'" He was then diagnosed with dementia praecox, or schizophrenia, but Kerouac said this testing was a "folly" and a "farce." He later told his mother: "as far as I'm concerned I am nervous; I get nervous in an emotional way but I'm not nervous enough to get a discharge."

The next year, in 1944, Kerouac was arrested as a material witness in the murder of David Kammerer—which is the focus of the upcoming movie Kill Your Darlings.

But the important thing here is that years of smoking, drinking, going "mad," and road miles seemed to age Kerouac nicely, no?

#jack kerouac
#mug shot
#naval reserve
Do you know the scoop? Comment below or Send us a Tip