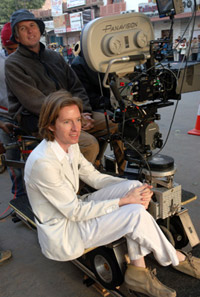 The New York Film Festival doesn't begin until Friday but you can get your first taste of what will be unspooling on screens at Lincoln Center tonight at the Soho Apple Store. Director Wes Anderson and stars Natalie Portman and Jason Schwartzman will be on hand for a screening of Anderson's new 12 minute short film Hotel Chevalier at 9 pm.

The short was shot entirely in a Paris hotel room and serves as a prequel to Anderson's new movie The Darjeeling Limited about three brothers traveling across India by train, which opens the festival and gets a theatrical release this Friday.

Chevalier will screen at the festival but not theatrically, so until it comes out on DVD (or gets leaked to youtube) this is your opportunity to Natalie Portman's Jean Seberg impression (and in the buff, no less). Ahh, all the young actresses these days want to be like the New Wave muses. (Check out an early review of Darjeeling from Slant and we chatted with Anderson when Life Aquatic came out in 2004. A Gothamist review to come after we see it on Thursday.)