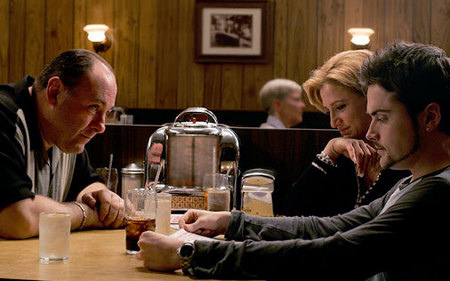 Remember the summer night that Journey's "Don't Stop Believin'" rang throughout the homes of Sopranos fans? Followed by a good week or two of debate on how David Chase chose to whack the series, everyone on the inside was pretty silent. Now Chase is speaking out about his decision. The AP reports:

He strongly suggests that, no, Tony Soprano didn't get whacked moments later as he munched onion rings with his family at Holsten's. And mostly Chase wonders why so many viewers got so worked up over the series' non-finish.

"There WAS a war going on that week, and attempted terror attacks in London," says Chase. "But these people were talking about onion rings."

Well, it was a little bit bigger than onion rings! Chase continues by saying, "The pathetic thing -- to me --- was how much they wanted his blood, after cheering him on for eight years." Most would think that one would be happy people were so enraptured in something they created, and perhaps seeing that - Chase offers up some inconclusive conclusions as to where the characters went after the screen went dark.

A.J. will "probably be a low-level movie producer. But he's not going to be a killer like his father, is he? Meadow may not become a pediatrician or even a lawyer ... but she'll learn to operate in the world in ways that Carmela never did.

As for the final scene, Chase says the Directors Guild wouldn't allow him to end the show how he wanted - with no credits once the screen went black. And for those still pondering the meaning of it all, he adds, "There are no esoteric clues in there. No Da Vinci Code. Everything that pertains to that episode was in that episode."