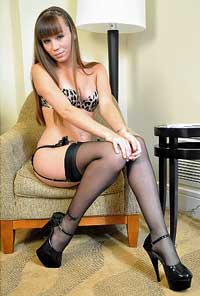 According to the NY Post, Anderson/Walsh was known as sweet and "conservative" to those in her father's neighborhood in the Bronx, where he breeds Yorkies and works three jobs to support his family. The 74-year-old, who emigrated from Ireland, is reportedly "destroyed" by the news that his youngest daughter is not only in adult films, but selling herself to celebs.

That's right, the actor was allegedly supposed to pay her $12,000 "for a night of sex," but when he couldn't find his watch (a collectors item) or wallet, he accused her of stealing his things and, well, the rest is well documented. A source told RadarOnline that Walsh/Anderson is "furious because he still never paid her! And she's determined to get her money one way or the other, so she's shopping her story. Saying she'll go to the district attorney [in Colorado] makes her story more valuable she thinks and puts pressure on Charlie."

Sheen was allegedly found doing coke in the bathroom of Daniel restaurant prior to the Plaza outburst; he was there with Walsh/Anderson, his ex-wife Denise Richards (who left early), and several other escorts he ordered up for his assistant and buddies. His assistant, by the way, had his wallet the whole time.

#Capri Anderson
#Charlie Sheen
#Christina Walsh
#coke
#drugs
#the plaza
Do you know the scoop? Comment below or Send us a Tip