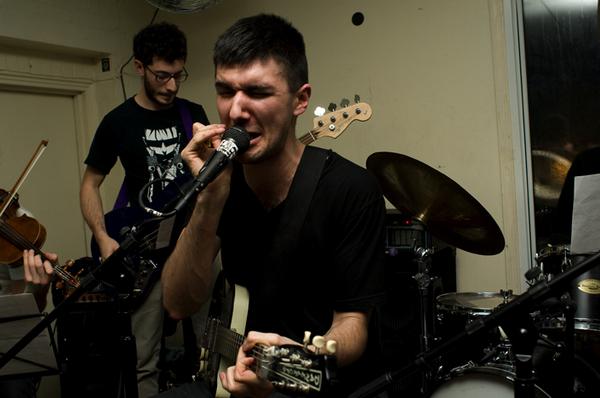 Charlie Looker has created music under many names, and with some familiar names as well (you can hear him on the Dirty Projectors "Rise Above" album). Now, as Extra Life, Looker creates what Stereogum calls "a mesmerizing form of avant-rock raga." Today he plays at our Gothamist House show, and we highly recommend coming to check the set out. This week one of the artists showing work at our House, Paula DiGioia, interviewed Looker for us.

What is the band name "Extra Life" all about? Video game reference? Metaphysical allusion? And how does it relate to the music you make? I was attracted to the phrase "Extra Life" because, although it comes from video games, it can also have a mystical vibe of reincarnation. For me creative activity, particularly live performance, is like a death and rebirth. In a live show, the performer suicidally ends his Real Life and creates her Extra Life, a ghost which is artificial and therefore more powerful than the Real. The Real Life is necessary, true, and heavy with the substance of integrity. The Extra Life is unnecessary, false, and light with the playful violence of haunting. That's why I'm into it. When I perform, it's not me. It's a constructed, hyper-intense, Extra version of me. I don't technically need it to live. It's just... "fun"(?) To me, the Real in music means composition, execution, notes, rhythms, music's interior, its depth. It also means honesty and personal expression. The Extra in music means the shiny seductive surface of attitude, persona, magic and vibe. I want music to have both, of course. But I named the band Extra Life because I wanted to shift the focus away from Real deep musical "quality" and more toward the indulgent, flattened 2D golden halo that hovers around it.

If you could have one visual artist throughout history "paint" your music who would it be? Why? I don't know the names of any specific artists from this period, but I'm thinking of Byzantine art. I love all Medieval art. One reason is simply the spirit of severe conviction inherent in any religious art. However, in Byzantine art this devotion is expressed in the most opulent, luxurious, excessive way. To me, this ties in with the idea of Extra Life. The Byzantines are expressing something serious and deep to them, but with such lavish excess that the voluptuousness of the aesthetic eclipses the religious worship they are trying to pay. In other words, the surface threatens the depth. Plus, the rendering of perspective isn't realistic yet. So the work is all surface. An intense, radiant, two-dimensional expanse of flat golden halos.

Extra Life's music seems to have a medeival vibe, at some times Bach-like. Where does this come from? As for Bach, he made some of the best music ever made. I love it. But I definitely relate more personally to Medieval and Renaissance music (Early Music) than to the Baroque. Without getting overly technical, there are certain melodic tendencies in Early Music which I deeply relate to. One thing is that symmetry is not a value. Melodies are thought to be beautiful when their movements are asymmetrical, yet balanced. To modern ears it can sound meandering and random, but it's all about the momentum of variation and the subtle elegance of how these relatively long melodic gestures balance themselves out in the end. Another aspect of Early Music which is deep for me is the extensive use of melisma. This means holding out one syllable of a word over many notes. Again, way too much to address fully here, but I love it because it uses the voice as an instrument. It also raises issues of the relationship of text and music. I'm actually starting writing an essay about melisma, which I'm going to set to music. Peep that in like '10.

What are your earliest musical memories? What are your earliest regular memories? My earliest musical memories are my dad teaching me the piano when I was five. He forced me to practice really seriously until I was thirteen and I became a little virtuoso. He was kind of an asshole about it, and for years I resented it. Nowadays I'm actually really psyched he made me do it because it got music in my brain early on, and it taught me about hard work, focus, constructive self-criticism and follow-through. I wonder what else my dad was right about. Fuck.

What was your high school band like? Any good? If so, did you get chicks as a result? My high school band was called Shelf Life. We were definitely on the Fugazi-Quicksand axis, but more poppy and emo. Nothing has ever been more 90's than Shelf Life. For ninth graders we were pretty tight. We played at Coney Island High, CB's and the Spiral. Remember those spots? As for chicks, I was definitely not a ladies' man in high school... But I did mess around with this really hot girl after Shelf Life played in a church basement on the upper west side with Shades Apart and Sweet Diesel. Remember these bands? That one night almost made up for the rest of high school.

Why did you name your full-length "Secular Works"? "Secular Works" is an ironic reference to Early Music. Medieval composers would write sacred music for mass, and then also secular music in various popular forms, songs, dances, etc. When you buy a CD of some Early Music, it will often say "The Complete Secular Works of...". So the title is jokingly pushing my Medieval fetish beyond where people even know what I'm talking about. However, there is a serious side to it as well. This is that, while I'm so moved by various works of music and art which were motivated by religion, I myself am highly distrustful of organized religion. This is relevant now when the people who run the country don't believe in evolution and take the bible at its word. This is NO joke to me. So when I say the music is secular, I'm seriously distancing myself from the whole current Christian culture, which has a hold even in indie rock. Non serviam.

Last year Natasha Khan from Bat for Lashes talked about the "80s hoodie films" (ET, The Goonies, etc) and said "they all contain seminal scenes in them where the kids get on their bikes, wearing the coolest hoodies and cycle out on an adventure in to the unknown. This moment symbolizes something ... an epiphany when you move out of your comfortable childhood microcosm into the big bad world." Do you think there's any relation, intentional or not, between your song "Black Hoodie" and the idea behind the scenes in these movies? Possibly, but possibly the opposite. I got into wearing black hoodies at the same time as I got into punk, metal, playing in bands, and being negative. "Black Hoodie" is about not being able to grow out of adolescent issues and problems because those problems have become part of the basic fabric of how you see yourself. In the song, the hoodie is something you hide in. It's comfortable, but it's negative. It's taking your kid problems, weaving a black cloak out of them and just hiding in it, saying "fuck it, this is how I am". So the song it about getting older, and seeing Death on the horizon wearing HIS black hoodie, and realizing that you haven't changed since you were a kid and in fact your whole life has been death. I don't feel this way most of the time, it's just a song. But that's what the song is about.

Why motivates you to continue creating music? Many things continue to motivate me. The really important one is simply the inspired pleasure of writing, rehearsing, practicing and performing. When I'm deep in these activities, there is a sense of stillness. I wouldn't even call it "exciting". It's a more absolute, immovable kind of joy, a centering where I'm reminded why I do music. As long as I can keep returning to this place of stillness, I'll keep doing music. Other less beautiful factors also motivate me such as ego, careerism, fear of death and wanting to leave something behind. But these things can't support the whole endeavor. Only the continual return to the essential joy of doing it can really keep it going.

What's you're day job? Or do you have a Sugar Mama? I teach guitar and piano lessons, private and group classes. I make house calls and teach through after school programs. I have a lot of young kids, tweens and teens. I also have some older students who study composition and music theory which is great, because they actually know my deal and it overlaps with my creative work. All in all it's really cool, even the music to Rent.