Changes At The Chelsea 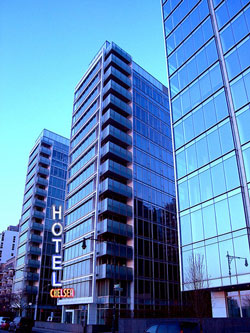 On Sunday we posted about the Bard Family being all but dismissed from their post at the Hotel Chelsea. As the interrogation spotlight continues to shine in the faces of the faceless "Board" that made the decision, a press release was sent out to explain what's going on behind the famous doors.

The Bard Family, who have run the hotel from Mark Twain to Nancy Spungen to now, have been replaced by a new regime in the form of Richard Born and Ira Drukier. You may know them from such buildings as the Maritime Hotel, the TriBeca Grand, the Mercer Hotel, and...this, amongst other ventures.

The press release uses words that insinuate a "modernization" of the building, to counter every one referring to "preservation". This does not bode well. It starts: "BD Hotels [led by Richard Born and Ira Drukier] has been retained to better preserve, restore and reinvigorate the Chelsea Hotel. We are excited to be working with the BD Hotel team in restoring and rejuvenating the Chelsea. After conducting an extensive search, we are convinced that there is no one better suited to the dual challenge of pursuing an ongoing modernization while at the same time ensuring that the hotel’s historic charm and character is both preserved and enhanced.”

The initial contract is a three-year management agreement that will have them managing the hotel’s "day-to-day operations, budgeting and accounting, long-term planning, developing and implementing a coordinated renovation plan, and overseeing the street-front retail program." They've also been charged to "create more inviting and livelier common areas."

The press release goes on to say that "long-time Chelsea Hotel manager Stanley Bard, who has been a fixture at the Chelsea for more than 50 years, is expected to have a role at the hotel as will his son David Bard, who also is a member of the Board of Directors." What this role will be has yet to be made clear to anyone. As for the two who have been put in the Bard's rightful place, they say, “We are honored by the opportunity to burnish and build upon The Chelsea Hotel’s unique artistic presence. Given its fabled past and unique status, the Chelsea Hotel can once again become a crown jewel of New York City." Burnish and build upon? Get ready for a Disney-fied version of a legendary hotel.

More frequently updated posts from the front line at the Hotel Chelsea Blog, and after the jump one of our commenters has a suggestion.

The residents were on the roof figuring out how to pay their rents as
Stanley and David walked out of an empty lobby today. Not the last time
they'll be there, but definitely the end of the line.
Everybody: Get out your scissors, photos, paste, (whatever other substances
you might need) and cobble together a postcard with a message to Stanley -
send it to:
Stanley Bard
Hotel Chelsea
222 23rd Street
New York New York 10011

Flood the front desk with these small works of art! Make 'new managment'
deliver it to Stanley, aka, the Ambassador. Mine's in the mail tonight..."