Belvedere Castle was created by Frederick Law Olmsted and Calvert Vaux in 1858; the Central Park co-designers had it constructed from the same Manhattan schist that it would stand upon. While originally more of an open-air terrace that delivered sweeping views of the park, in 1919 windows and doors were added as the U.S. Weather Bureau took over and used it as a weather station. They remained until the early 1960s, and when they departed, the Castle was left to deteriorate in abandonment for twenty years.

By the 1980s, Central Park—along with its Castle—was in ruins. "There was no management plan in place so we started small," Doug Blonsky, now former President and CEO Central Park Conservancy, had told us regarding the massive makeover the park got soon after the CPC formed. At this time, Belvedere Castle was in shambles and heavily vandalized with graffiti; it was neither open or closed to the public, simply there for those who dared to enter. 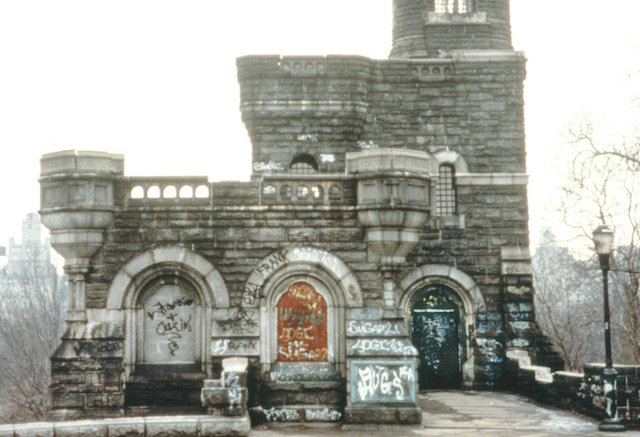 In 1983, however, things turned around for the Belvedere (which means “beautiful view” in Italian, by the way), and it officially opened as a visitor center and gift shop thanks to a major renovation. At this time, restoration work included "rebuilding the conical roof on the tower, recreating the pavilions, removing the bars from the windows, and adding wooden shutters." In 1995, it got some more work done when those wooden shutters were replaced by glass and metal grille work.

It remained open through February 2018, when it was closed once again for restoration. This time around, the CPC was looking to do a more "comprehensive restoration," so in addition to recreating "lost aspects of the Belvedere’s historic design and improving the condition of its structures," they modernized critical infrastructure and implemented a green design with a new geothermal system for cooling and heating. According to the press release, to achieve this "the team dug 400 feet into Vista Rock to construct this sustainable and environmentally beneficial system, which has zero emissions and is energy efficient."

They are now set to reopen on June 28th, but we got a sneak peek today to get a look at things—you can click through for a look in the photo gallery above. (We requested a look at the basement during a tour today and were told it was off-limits, so we can only conclude it's a portal to that underground city they are hiding.) 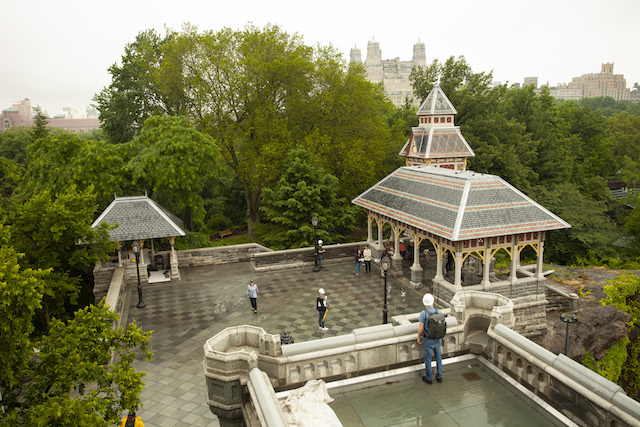 Here are the big bullet points regarding this most recent renovation (which cost $12 million and was funded by The Thompson Family Foundation); from the CPC:

Up next: the Conservancy is working on the creation of an accessible route to the Belvedere, and say preliminary design is underway for the reconstruction of the pathway between the Castle and the East Drive. (This plan for this has previously been criticized by some preservationists, according to the NY Times; we've reached out to CPC for updates.)

You can find Belvedere Castle (which is free to enter) mid-Park at 79th Street atop Vista Rock. It is the Park’s second highest point. (The park's highest natural elevation is Summit Rock.) Elizabeth W. Smith, President & CEO of the Central Park Conservancy, said this week, "The Belvedere has a special place in the hearts of New Yorkers and visitors alike... like the rest of the Park [it] was designed to provide an oasis from the stress of the city."