Here we go, the dominos are falling. Yesterday HBO announced that next year they'll offer a stand-alone streaming service to non-cable customers. With a lot of television consumers cutting the cable cord and using devices like Apple TV or Roku (which allow you to add channels, as well as Hulu, Netflix, and Amazon Prime), this is a smart move for HBO. Especially since most of their programs can be found streaming for free online somewhere, for those willing to search.

Of course, it's only a matter of time before the rest follow... but we thought some more direct competition with HBO would be the next to announce, like Showtime or AMC. Today, however, CBS announced a stand-alone streaming service of their own, called CBS All Access (available now).

Many of their shows have been offered for free on their website, but their new subscription service, which will cost $5.99 a month, will let people "watch its live television programming and thousands of its current and past shows on demand without paying for a traditional TV subscription," according to the NY Times. This is "the first time that a traditional broadcaster will make a near-continuous live feed of its local stations available over the web. Subscribers will be able to watch local CBS television stations in 14 markets [including New York]. More affiliates are expected to join. Available in all markets are episodes of current prime time shows the day after they are shown and more than 5,000 episodes of such series as Star Trek, Cheers and MacGyver.” 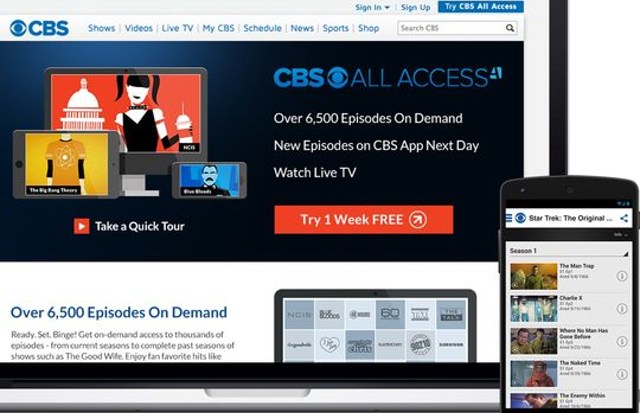 CBS is also the only network that doesn't really seem to stream shows via Hulu—aside from The Good Wife and a couple of others, you currently have to go to CBS.com to watch most of their shows (including Elementary and Blue Bloods, included).

Not included in their service is sports—though the Times notes they're in discussions with the NFL to stream games.

#cbs
#CBS all access
#streaming
#tv
Do you know the scoop? Comment below or Send us a Tip