CBGB Lives on in Storage 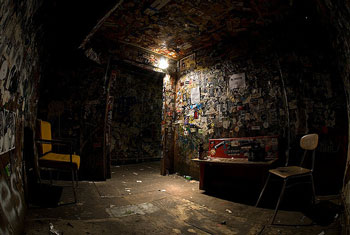 When most venues close they don't necessarily get all sentimental and pack up every piece of floorboard and pint glass that resided there...but CBGB was different, with every peeling sticker a commodity. The NY Times takes a look at where it all went following their closing and dismantlement in 2006, and keeping in tune with the venue's recent history: it's pretty grim.

Sure, the awning lives on at the new Rock & Roll Hall of Fame Annex in SoHo, but the bar is now held in a trailer in Connecticut, and the rest in a 3,000-square-foot storage space in Williamsburg. But wait, it gets more depressing! The club's old manager, Louise Parnassa-Staley, along with the former barman (son-in-law of the late Hilly Kristal) are also in the storage space, running what's left of the business, including CBGB Fashions, from the same desk that used to greet the venue's audience.

Parnassa-Staley told the paper, “It’s sad, but it’s not really dismal. It’s quiet here, you know. And there’s no rats.” There's always an upside. As for what will become of the venue's remains, they're exploring "what to do with the club’s vast trove of paperwork," which includes set lists, band contracts and other documents that have become a part of New York's music history.

#cbgb
#storage
#venue
Do you know the scoop? Comment below or Send us a Tip