The current owners of the CBGB name (and possible future venue), Tim Hayes and Louise Parnassa Staley, are the latest to keep Pussy Riot's fight alive. Hayes told us today, "We have been working closely with Amnesty International for a very long time in support of Pussy Riot... We spend a lot a time trying to give the girls and their families real support. Their case is important to us. They are the most dangerous band in the world. These girls would eat Green Day for breakfast. They are standing up to Putin and trying to change the world... Nobody in Russia has succeeded in standing up to him like Pussy Riot and the girls are not getting the help that they need. Pussy Riot are freedom fighters and they may actually end up changing the world... that is pretty bad-ass."

For their part, the two hand-delivered a letter to the prosecutor's office in Moscow earlier this week, telling Rolling Stone, "Amnesty International had 100,000 signatures and took them to the Russian Embassy in Washington, and were physically removed from the building... After that happened, Louise and I decided to take the single letter signed by the celebrities and hand-deliver it to the prosecutor's office in Moscow." You can read the letter below, which is signed by Pink Floyd's Roger Waters, the family of Joey Ramone, Peter Gabriel, No Reservations host Anthony Bourdain, Hole's Patty Schemel, and Cheap Trick's Bun E. Carlos.

In the letter, the group calls for "the immediate and unconditional release of Maria Alekhina, Ekaterina Samutsevich and Nadezhda Tolokonnikova," the three members of Pussy Riot who were just sentenced to two years behind bars on a charge of "hooliganism." 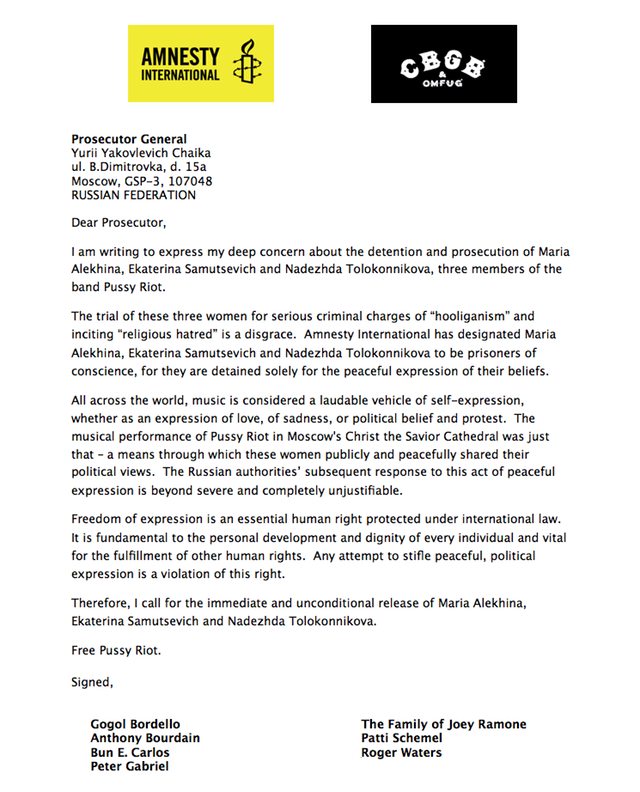 #cbgb
#letter
#Louise Parnassa Staley
#pussy riot
#russia
#tim hayes
Do you know the scoop? Comment below or Send us a Tip