Stills from the video, showing how to properly crash a Batpod into an IMAX camera. 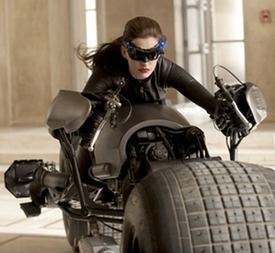 Last week Christopher Nolan released the first photo of Anne Hathaway as Catwoman in The Dark Knight Rises (and Hathaway knows that you think she looks "meh", Internet). She was perched upon the Batpod, but other photos of her in action on set were actually of a stuntwoman. And now TMZ has video footage of that stuntwoman crashing... into a very pricey IMAX camera!

They followed up the footage with a poll, asking if Catwoman proves women are bad drivers. C'mon TMZ, you didn't do this when Nic Cage was crashing all over the New York City streets.

The Dark Knight Rises shot was being filmed in Pittsburgh, at a building that will portray Gotham City Hall in the movie. The movie hasn't shot in New York City yet, but they will be... so hide your expensive camera equipment.

#batpod
#catwoman
#crash
#oops
#stunt
#stuntwoman
#the dark knight rises
Do you know the scoop? Comment below or Send us a Tip
A new Gothamist is coming! We’ve moved comments over to our beta site. Click here to join the conversation and get a preview of our new website.