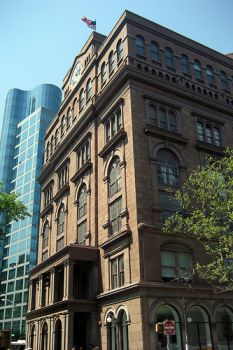 Another clash of the art world and the religious reich is going down in the East Village. The AP reports that a "Roman Catholic watchdog group is protesting a student art exhibition that includes vulgar depictions of religious symbols including a crucifix and rosary." Just how does one depict a rosary as vulgar? There are ways:

The target of the protest is a series of paintings by Felipe Baeza. One of them depicts a man with his pants down and a crucifix in his rectum. A Latin caption says, "The day I became a Catholic." Another painting shows rosaries with male genitalia and a third, a man with a halo and erection.

The controversial pieces will be on display at The Cooper Union art school through June 10th; the school met the attack with one simple statement: "Hundreds of student works are shown annually without censorship -- a tradition at the school since its founding by Peter Cooper 150 years ago." The president of the Catholic League for Civil and Religious Rights gave his own, more long-winded statement about the show, which said in part:

Surely there is a difference between art, traditionally understood as conveying beauty, and junk. I have the sneaking suspicion that these paintings made the cut precisely because they were an assault on Catholic sensibilities. No, I can’t prove what the motive was, but I can be deadly certain that if even a reverential portrait of Muhammad had been offered, it would have been rejected. I hasten to add that if a reverential portrait of Jesus had been submitted, it too would have been rejected, but for entirely different reasons.”

This isn't the first time the Catholic group has been up in arms over art; In 1999, The Sensation show at the Brooklyn Museum was met with controversy when Giuliani tried to stop it, and attempted to prevent taxpayer funds from subsidizing the museum.