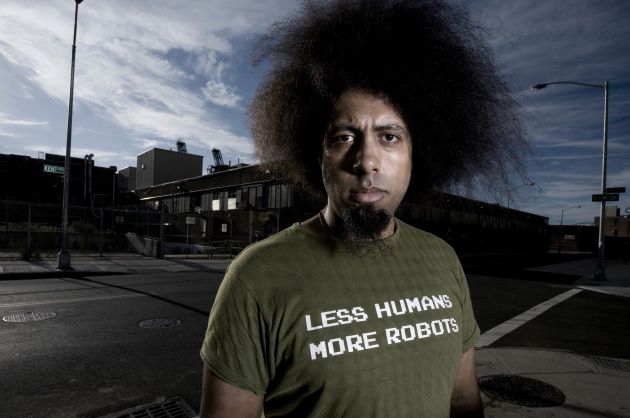 The Under the Radar festival ends this weekend, so do yourself a favor and go check out one or more of the many astonishing productions that are passing through town for what is arguably New York’s most exciting annual theatrical event. Even if you’ve had nothing but horrible experiences as a captive audience at boring theater, you’re sure to be turned around by a show like Disinformation, which we saw last night and can’t recommend highly enough.

Disinformation is not an easy show to describe, which is a good thing. The first to note is that Reggie Watts, the show’s mad theatrical scientist with Sideshow Bob hair, is one wickedly funny man. In Disinformation he’s supported by a quartet of tireless performers as he coaxes the absurdity out of the corporate bromides, 2012 eschatology, gangsta rap posturing, and commercialized sex that litter the post-modern landscape. Watts prods his subjects obliquely while relating some wildly fantastic stories about secret underground grottos and science fiction camouflage suits like those found in Predator. Mixed with these hilarious monologues, he’s produced a series of bemusing promotional videos for a friendly/sinister corporation called Carnaidesai, a company with a vague purpose but one portentous mission statement: “There’s not much future left, but we’re using all of it!”

As a counterpoint to all this, Watts repeatedly dives headlong into bizarre hip-hop and soul numbers composed on the spot with a delay modeler, which enables him to lay down multiple vocal tracks, distort them, loop them simultaneously, and scatter his relentlessly funny left-field rhymes on top. (Andrew Bird fans will be familiar with this technique.) The ultimate effect of Disinformation is a kind of confused euphoria, which most people pay a lot more than $15 to experience. 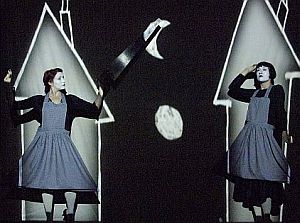 Of the other productions remaining, the hottest ticket has been for Nature Theater of Oklahoma’s dance experiment Poetics: A Ballet Brut. But don’t sweat missing it; they’re New York based and their Under the Radar show last year, No Dice, was reprised to great acclaim recently at Soho Rep – we’re sure you’ll have another shot at this one. Besides the must-see Disinformation, we can also vouch for Between the Devil and the Deep Blue Sea (pictured); our review here.