Since it was invented by a gang of childhood friends from Highland Park, IL in 2009, Cards Against Humanity, a self-proclaimed "party game for horrible people," has taken the world by storm with its irreverent, often off-the-wall humor. We caught up with two of the game's co-founders, Max Temkin and Josh Dillon, to find out how CAH went from being an off-the-cuff New Year's Eve invention to Amazon.com's top-selling item and your roommate's favorite drunk pastime.

Today, Black Friday, they're charging $5 more for everything.

How did you guys come up with the idea for the game?
Max: Well, we were always making games and toys together. Me, Josh, [Josh's sister Molly] and our families took a trip when Josh and I were in 6th grade to the Illinois State Fair, and while we were in downstate Illinois, Josh and I invented this board game. It was kind of this territory, fighting, control war game, just a super basic board game. Josh had a lot of fun doing optimization of balance in the game, making sure the units were equal power and relative to each other, and I had a lot of fun doing the design of the game, designing the little pieces and the board and the icons. It was terrible, I did it in like Microsoft Word, I think. In fact I’m pretty sure I still have it in my closet. So it goes back to that. We’ve just always been thinking of games and puzzles and stuff, and we also got interested in comedy.”

Josh: We also got interested in party games throughout school and college. We played Werewolf or Flash Mafia, games like Contact and so on and so forth.

M. It was always good, when we would have parties, for people to play games with us. Even if they didn’t know all our weird inside jokes, they could still participate.

J: The idea [for Cards About Humanity] came at the end of December 2008. We were looking for a game to play at our New Year’s Eve party, and we were like, well, let’s make our own question and answer game.

M: We’d done other kind of games in this style. We did one where it was just questions and the game was that you had to write fake answers, and had to trick everyone into thinking your answer was the real answer. And that was impossible for friends and girlfriends to play because obviously they didn’t know each other as well as we knew each other. So then we came out with the next iteration of that and obviously anyone could play because we wrote the questions and answers.

I remember there being a lot more poop jokes in the earlier editions.
M: Well the version you played, it came out of us all sitting in [co-creator] Elliot Weinstein's basement, and anything we thought of we just wrote down on a pad and made cards. We didn’t know what would be funny and what wouldn’t be. We were just like "Well, we’ll just try and learn what’s good and what’s bad." Over the year’s we’ve gotten much better. But at least once a year, we all gather in Chicago or wherever we are and discuss whether we want to replace each card with a better joke or not. The game is still growing and changing and the jokes are still getting better.

How do you come up with new card ideas? Is it difficult to sustain a game like CAH, because you have to keep coming up with new, "edgy" cards?
M. It definitely gets harder and harder as we’ve been working on it longer. I think there are to two reasons. The first is that we’ve gone after the low-hanging fruit, like we’ve made all the simple fart jokes or whatever that we can just put on a card. Although recently we were working on the 4th edition of the game and we discovered that “a fart” wasn’t on a card, like somehow we’d missed it. We were so happy when we discovered that because that’s just the lowest-hanging fruit, like it’s so easy and it’s funny. Those are mostly gone, we’ve used those up. So things have been harder to write but we’ve also become much better writers. We’re really picky, we don’t just let anything in, we have high standards for what we put in the game. A good card has to be surprising, like it can’t just be a trope or something. It can’t be like, ‘Shit Girls Say’ or some online meme like that because people are just so bored of that by the time they see it in the game, and no one’s going to want to play it 10 times.

We try to do cards that take a position on something or paint something in a funny light. So here’s one. ‘A sweet spaceship.’ This is one from Extension 3, I think, and we could have just done ‘a spaceship’ and that would’ve been moderately funny in the cards, but a ‘sweet spaceship’ that has such a voice, it tells you so much. It’s like a little kid who’s so proud of it, and it just has so much character to it, so that’s what we’re looking for.

Have you ever faced any legal action from the company behind [similar game] Apples to Apples?
M: Apples to what?

J: Is it like the phrase ‘comparing apples to oranges’ or…?

M: No, we’ve never heard from them. It’s a really different game, like mechanically, we have pick-twos, we have all sorts of different formats. And ours is also explicitly a comedy game so it’s for a really different audience. At its heart, it’s a question and answer game and there are a million different games like that.
J: The biggest inspiration for the game itself was actually Mad Libs. 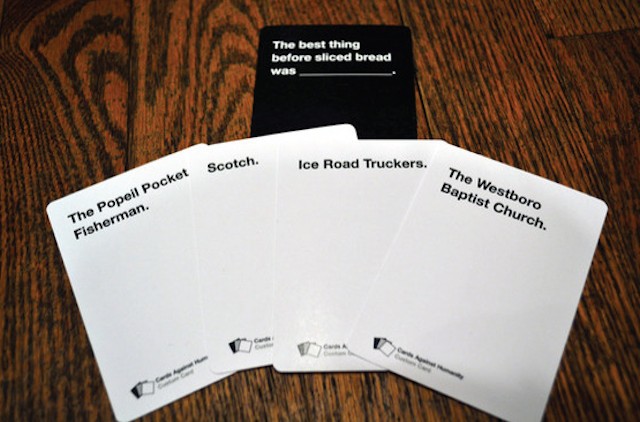 The game was originally funded by a Kickstarter campaign

Have you ever received any complaints from any parent groups or anything like that?
M: No, and we’ve actually never received any kind of complaint from any organization, which I find shocking. I thought for sure, you know, even one of the celebrities in the game would be like, ‘Take my name out of this’ or something, but we’ve never heard from anyone.

J: I think one of the reasons we show the cards online for free is that if people are offended by the contents of the game, it’s kind of their fault because they could’ve looked at it. The entire game is available online, they could’ve known that these are the kinds of things that’d be in there.

M: Right, and since the beginning we’ve always been upfront about it, like, ‘These are the most horrible things we can think of.’ You know, for some people these are going to be painful topics or awkward topics, and for us it’s just kind of a way of dealing with them and finding something funny about them, and that’s not for everyone and it doesn’t have to be. But we’ve always been upfront about calling it a party game for horrible people. I think we say you have to be 21 or up to play it, or 18 and up, or some ridiculous age that no board game should be.

Like Josh said, there are very few negative reviews on Amazon. We'll get maybe an email about a card. But they’re usually not mad, they just want to talk to us. They’re like ‘I was really surprised this card was in the game, I can’t believe someone would make a joke about this, like what’s the idea behind this?’ And we respond to every email we get. We usually explain, "Here’s what we thought was funny about it and we didn’t mean to offend anyone." The other thing is it’s not like a movie, like people aren't going to see it in theaters and be ambushed by this thing and have to subject themselves to it. You can edit it yourself, you just take the cards out of the deck. It’s really simple to customize it to your own tastes. We really haven’t heard any complaints about it.

What are your favorite cards?
M: I'm claiming the black card ‘Man, this is bullshit, fuck [blank].’ I think that’s my favorite card in the game.

J: I might also have to go with a black card. Because I really like the ‘Make a haiku.’ It takes a lot of patience and finding the right play can take a minute or more. The number of cards goes up really, really quickly with the number of cards involved, especially if you’re playing with like a 12-card hand. So there’s a lot of different jokes you can make with different hands. The same is true with the other pick-threes, but that one’s sort of the prototypical in my mind.

What about white cards?
M. My classic favorite white card is ‘A falcon with a cap on its head’. That’s just always been my favorite card in the game, it just makes me laugh every time, and I like the animal cards a lot so I also like ‘a micropig wearing a tiny raincoat and booties’ and I also really like a new one we wrote, ‘a stack of puppies in a trenchcoat’.

#cards against humanity
#interview
#josh dillon
#max temkin
#original
Do you know the scoop? Comment below or Send us a Tip
A new Gothamist is coming! We’ve moved comments over to our beta site. Click here to join the conversation and get a preview of our new website.