Can't Get Hamilton Tickets? Watch Them Play Softball For Free On Thursdays

It’s 11:18 on a sunny Thursday morning, and the Hecksher Ballfields in Central Park are packed with softball teams. On one field, team Aladdin warms up in royal purple jerseys. On another, Les Mis practices in bold red uniforms. On a third, team Beautiful stretches in yellow shirts while its competition, Hamilton, takes practice swings in near-identical jerseys. Both teams are cracking jokes about the unfortunate color scheme, but the Hamilton crew has at least one thing that sets it apart: an official team mascot, Max, the so-called “Hamildog.” Broadway Show League's season is back.

The league is a long-running New York theater tradition that dates back to the 1950s. The casts and crews of various shows would gather in Central Park to picnic and play ball as a way to relax before their evening performances. Eventually, a stage manager from the Actors Fund, John Effrat, stepped forward to organize an official league.

Nowadays, the organization pits Broadway and Off-Broadway performers, stagehands, ushers, bartenders, and orchestra musicians against each other in weekly softball matches. There are three co-ed divisions, including one named for Effrat, and they batter up at 11:30, 1:30, and 3:30 every Thursday. 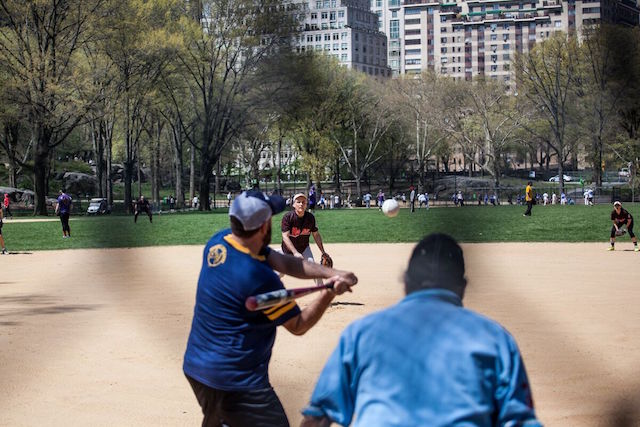 Although the team rosters are fluid, the games are also a venue for celebrity spotting, if you don’t feel like waiting by the stage door—past players include Al Pacino, Glenn Close, Patrick Wilson, and Lin-Manuel Miranda.

Miranda's too swamped to make it out to the fields this time, but Hamilton is making its league debut in very capable hands.

Anthony Ramos, who plays Alexander Hamilton’s son Philip, is on hand for the season opener, though the back of his jersey reads “Da Franchiz.” 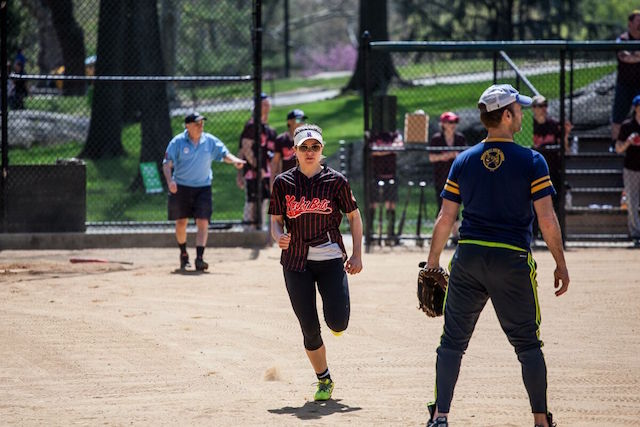 While this is Ramos’ first game with the Broadway Show League, the team’s manager, Angelo Gonzalez, has been playing in the league since the 1980s.

Although Gonzalez, a theatrical Teamster, claims he’s just here to manage, when one of his players twists his leg halfway through the first preseason game he leaps off the stands to take his place in the field.

Like your own office softball league, Broadway’s has its way of attracting diehards. Actress Samantha Hill is proudly repping Les Mis for her third year in a row, even though she left the production last summer. In the 1:30 league, Josh Segarra, who’s currently playing Emilio Estefan in On Your Feet, is batting for Davenport (as in, the Davenport Theatrical) for his seventh consecutive season. 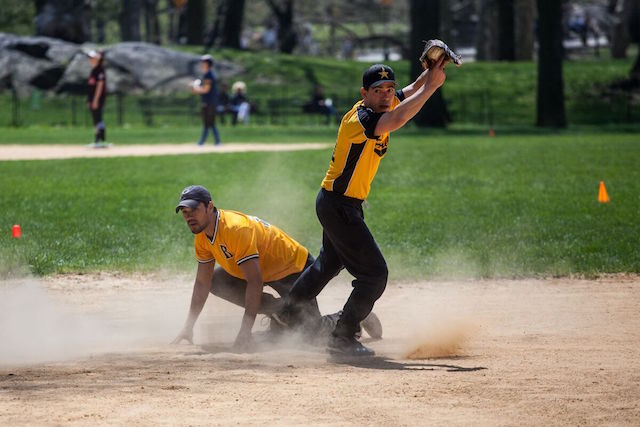 There's also some box-office based trash talking. Take, for instance, Kinky Boots actor Daniel Stewart Sherman’s reaction to team Matilda, the 11:30 division defending champs: “[I’m] not worried about it, because they’re closing at the end of the year."

To amp their teammates up, the Beautiful squad shouts, “Choo-choo now, y’all!”—a riff on the show’s song “The Locomotion”—as its battle cry, while the Hamilton crowd toasts, “To the revolution!”

“For me, it’s fun to come out here and act like I’m a big ball player for an afternoon,” says Segarra. “To act like this actually matters. That’s the best part. Then you get to go home and laugh about it. I’ve made so many memories with these guys over the past seven years that now it’s family. This is the first [team] that brought me on, so I’m loyal. No matter what I’m doing, we always come back together for this.”

Kristin Hunt is a freelance entertainment journalist living in Brooklyn.

#broadway
#hamilton
#showbiz they're just like us
#original
Do you know the scoop? Comment below or Send us a Tip