I still remember that morning I woke up and discovered that my apartment was no longer in Bushwick, but in East Williamsburg. Even though the peeling paint and cockroaches still looked the same, I had actually been transported to a shiny new neighborhood complete with a spate of organic delis and a whopping rent raise.

Now another neighborhood is seeking to partition and rebrand itself: Williamsburg. CurbedNY got a tip about Twitter account @WestBedfordNYC, a trendy new neighborhood within already trendy Williamsburg. What happens when you divide trendy by trendy? Trendier!

Here's their first tweet, from September of last year:

As many of you have noticed, there is a massive amount of huge new bldg's in West Williamsburg, near the river. Time for the the next DUMBO

The "next DUMBO" is demarcated along the BQE to the river and McCarren Park to Broadway, meaning it will retain only the richest and newest parts of the 'burg. It cuts out the Jewish area south of Broadway, the Hispanic areas West of Broadway and the Italian neighborhoods next to McCarren Park. (Bamontes who?).

What remains? J. Crew. Starbucks. The Edge. The Wythe Hotel. All of the sparkly new "West Bedford" stuff glamming up the neighborhood.

The Twitter account is dedicated to retweeted photos of all the construction going on in the "WB" along with creepy renderings of a typical "West Bedford" day, fishing and playing bocce ball under the glittering condos and skyways.

Brick Underground thinks that there is no name that could ever trump the allure of Williamsburg, but in the elitist world of real estate, who knows? 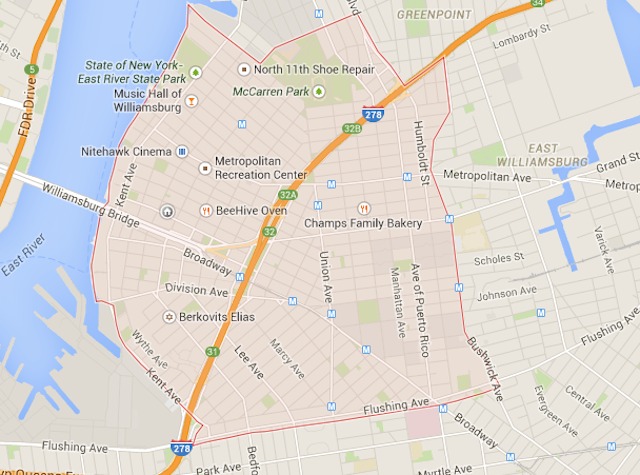 Lest we forget, here's how Google defines Williamsburg now, grit and all, before West Bedford, NoGrand or Triangle Below McCarren Park really take off.

#dumbo
#neighborhood
#West Bedford
#williamsburg
Do you know the scoop? Comment below or Send us a Tip