Can Mickey Mouse Save Broadway? 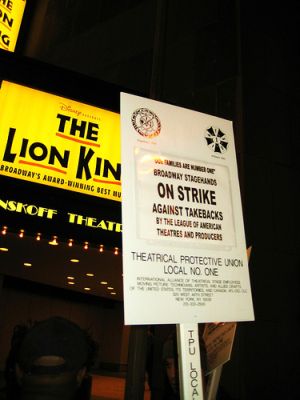 For the first time since November 8th, Local One, the stagehands’ union, is meeting with the Broadway producers’ league to talk it out. (Local One has been on strike since last Saturday over proposed changes to their contracts.) Insiders are expressing guarded optimism about the talks because they’re proceeding with the help of Disney’s senior V.P. of labor relations, Robert W. Johnson. Disney is not a member of the producers' league and thus not directly involved in the strike, but it appears the union has a much better rapport with Johnson than the producers. The hope on both sides is to reach an agreement fast so that the holiday theater season can resume before Thanksgiving.

But even if there is a breakthrough today all but eight Broadway shows will remain dark through the weekend. Visitors to the theater district may not be able to enjoy such theatrical triumphs as Legally Blonde, but they can take advantage of a 15% savings on area restaurants through next week. Mayor Bloomberg hashed out the deal with the Times Square Alliance to help local eateries weather the strike; some restaurateurs say they’ve seen business drop in half since the shutdown, and the city estimates a lost revenue of $2 million a day. Peruse the full menu of participating restaurants here.

And if you had plans to bring the family into town for a Broadway show, don’t throw in the towel – we’ve compiled a big list of terrific family-friendly off-Broadway alternatives – and a few of the shows are right in the Times Square theater district. (Check it out.) And Steve on Broadway has a handy list of Broadway shows that are still shuttered, details on refunds and the eight Broadway shows still running because their stagehands work under a different contract.