Camping by its nature means sleeping in a tent, on the ground, in various stages of hypothermia and discomfort—are those actually hundreds of daddy-long legs dangling from the mesh "window" above your head, or have the mushrooms tightened their grip too firmly on your psyche? Those unwilling to submit to the mercy of nature should stay home with the Apple TV and the puggle, but obviously it was only a matter of time before hipster affectation changed all this. 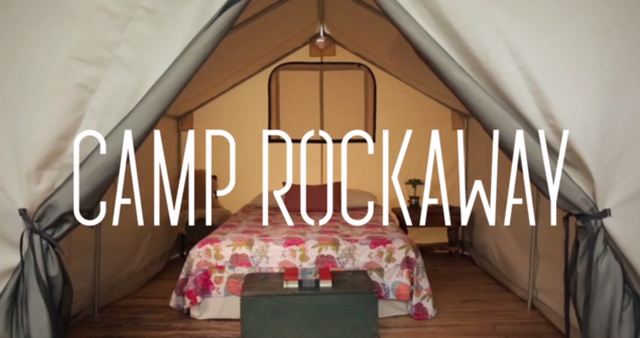 It's illegal to camp in the Rockaways, but if we've learned anything from Rainbow Birthday Girl, it's that all dreams, no matter how illegitimate, can get Kickstarter funding with a sufficiently polished video. It's this notion from which Camp Rockaway is spawned—a fun alternative to beach camping that doesn't entail getting kicked out at 4 a.m. by wrathful law enforcement not fooled by your clever ruse to pretend to be a pile of trash.

"There were a lot of times where we had great days at the beach—towards the end of the day, you know you're going back to the city and it's just steaming, and that's not where you want to be. You want to just stay at the beach," said Camp Rockaway founder Kent Johnson, his tone so freighted with self-importance it would have drowned if thrown in the water. Johnson explains he drew inspiration from the bungalow colonies of the early 20th century and sought to modernize them, just as others have sought to modernize 'smores using reclaimed artisanal marshmallow roasting sticks: By taking a great thing that's free or cheap and repackaging it for max profit.

Where the original bungalow colonies featured sleeved bathing costumes and dysentery, the modern version imagines a comely brunette in full makeup awaking in her tranquil bungalow, her eyes flicking around the white canvas ceiling. "Were those the waves crashing or just a car fire on Belt Parkway?" her serene, unlined face asks. At the end of the day, guests can walk out to the edge of Jamaica Bay, where they will Instagram the passing A train chugging against the sunset or take in an illicit horse shoe crab heist while sipping a Skinny Girl margarita.

But Camp Rockaway is more than just a for-profit business poised to rake in the inheritance money of fussy hipsters. It's about blending seamlessly into the rich cultural fabric of the Rockaways (the Rockaway Taco Rockaways, not the Unsightly Projects And Violent Crime Rockaways), and also, community. Community! Have we mentioned community? The video does, repeatedly. "The Rockaway community reminds me of the Kickstarter community," says Johnson, noting its diversity as the camera pans through a gaggle of coltish hipsters shivering from under their artists buns. They're all white, but some are wearing maxi dresses and some aren't, so he's got a point. "You've got people who are getting excited about creative ideas and wanting to contribute and help make it happen."

So far, Johnson and his team have done a "fair amount" of design and "a bit" of research, so the project may have a ways to go before you'll need to download your Glamping App.

#camp rockaway
#hipsters
#kickstarter
#rockaways
Do you know the scoop? Comment below or Send us a Tip