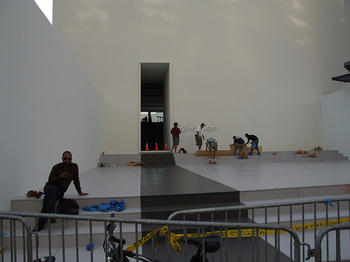 Ah, Fashion Week, so decadent. Calvin Klein wins the fancy pants award this time around, as he threw a pricey $3 million extravaganza on the High Line Sunday night, the Daily News reports.

The 40th birthday celebration included A-listers and, you know, a custom-made building on the abandoned railway. Forget the rise and fall of Tammany Hall, the fashion house's spokesman says this party was "a moment in time in New York history."

Klein did make an undisclosed donation to the Friends of the High Line, however, so it's not all about the spectacle. The group says the gift will go towards maintenance and operations for the future park. As for the temporary 3-story structure created for the event, it was said to have included 5000 white roses.

Renowned architect John Pawson created the temporary party space that straddles the 30th St. section of the High Line along 10th Ave. Guests will be able to walk along the first section of the city's new park. The structure is composed of three minimalist white-washed levels and includes a custom-built light installation by artist James Turrell. After the party, the building will be dismantled and all of the materials donated to city nonprofits; the plants will go to the Fulton House public housing project.