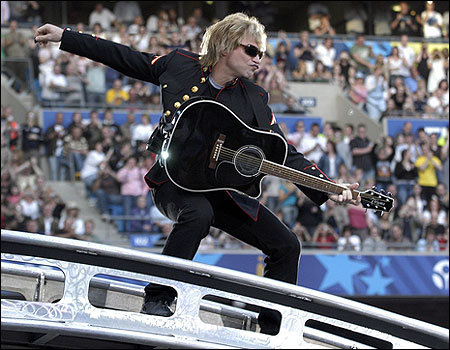 It's no surprise that ticket prices for the Bon Jovi concert being held in Central Park this Saturday went from free to $1500 in no time. As we mentioned yesterday, Spitzer had signed a legislation making online scalping legal, and Bloomberg agrees that there's not much that can be done. The mayor declared to the NY Post:

"The scalping is just a way of life. I can't tell you it's not worth that kind of money. It's up to you if you want to spend the money. But whatever the scalping laws are, you're going to have to comply with them."

It's up to the officials at MLB to enforce their limitations, which they said they plan to do.

Meanwhile, Jon Bon & Co. want the show to go down in history as the Most Important Musical Event on the Great Lawn of all time. (Suck it Paul Simon!) Unfortunately, they could only get Bloomberg to go up from 50K to 60K on the allowed attendance, which just isn't gonna cut it. The extra 10K people will be placed in overflow areas and have no view of the stage. No word yet from JBJ about his feelings on his fans paying out of the nose for the free show -- but as long as they're there for him, it seems like he's okay with it.