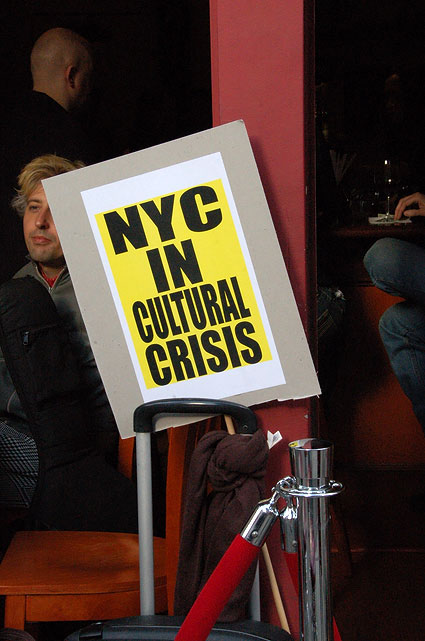 The ACMA (Alliance for Creative Music Action) is a group of musicians, artists and supporters of the arts who are joining together "as a pressure group to bring awareness about the needs of art in our communities." Tonight they'll be holding a Town Hall Meeting, demanding that the city provide "an adequate subsidized performance space in Manhattan." The meeting will be held just a block away from Tonic, a recent casualty amongst downtown performance spaces.

When Tonic shut down in April, supporters put up a fight and took it to the steps of City Hall, now the ACMA is continuing the battle. NY Metro reports that "on the heels of Tonic’s closure, City Councilman Alan Gerson began exploring ways to protect artists and, according to his spokesman Paul Nagle, 'We are talking with tax specialists to have something for [Speaker Christine Quinn] and the state by October.'” From the press release about tonight's event:

ACMA recognizes that New York City, historically the international capital for innovative music, is now facing an acute cultural crisis. The formidable forces wielded by a sky rocketing real estate market have steadily eliminated new music venues from Manhattan, driving out musicians and composers, young and old, famous and unknown, whom all have contributed mightily to the vitality of this great city. ACMA is working with government officials and private sponsors to vigorously reverse this trend. ACMA is now working with Arts for Art to find an adequate space to establish a creative music center, centrally located in downtown New York.

Tonight's meeting, which is open to all, will certainly cover how the arts (and such a space) can benefit the general community -- while letter writing, petitions, demonstrations, rallies, and raising awareness are all on the long-term agenda. Before you head over there take a look at how musicians are treated in other countries. One example from the Metro article is that musicians in Holland have their rehearsal space paid for!

The Town Hall Meeting is tonight at 6pm, and open to all. It is being held at Clemente Soto Velez at 107 Suffolk Street.