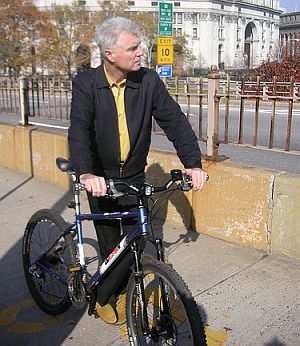 Former Talking Head David Byrne had a crosseyed and painful bike ride home the other evening – and briefly ended up in the hospital. According to Byrne’s own blog, he’d spent the night drinking and dining with his special lady friend and artist David Shrigley. While cycling home, the Grammy-winning artist’s bike tire “slipped on the cobblestones of West 14th St.”

Even sober, that uneven surface can be treacherous, and the tipsy Byrne went down like a bag of dirt:

I remember lying in the street, looking at oncoming headlights and rolling towards the curb so they wouldn’t run me over. Two cops approached and looked down at me. “Have you been drinking?” they asked. Probably a typical question in that neighborhood at that time of night. “Yes, I’ve had a few drinks,” I replied. “But I’m hurt.” I managed to get up by myself and retrieve my bike (no help from the NYPD, though one of them asked if I was David Byrne) and it wasn’t until later, when I was in bed, that the pain made itself truly known. I wondered how I would ever even get out of bed.

So the Meat Packing District has just about lost its last scintilla of character, but at least the local cops are still true to form – and give them credit for not telling him to go write a song about it. During a trip to the hospital, X-rays revealed two broken ribs, “numbers 3 and 5, way up high. They're healing now, little by little, and I was told that in 3 weeks I should be OK.” During his recovery, you can do Byrne a solid by playing the building for him.