Kevin Cox stood outside of 190 Bowery Saturday evening, gazing at a cluster of security guards and shaking his head. "This is where New York is going," Cox said. "I've been here for 33 years and I'm about done."

Cox, 50, was one of hundreds of people who visited the SoHo landmark last night, hoping to finally catching a glimpse of its sprawling 72 room, 35,000 square feet interior while attending the opening night of "First Show / Last Show," a gallery of works curated by Vito Schnabel and hosted by real estate mogul Aby Rosen. Rosen purchased the building in February from its longtime owner, photographer Jay Maisel, and last week circulated an email billing Saturday as "the first time this 1899 landmark building will be open to the public" since 1966.

(Gothamist has reached out to both Schnabel and Rosen's companies for comment on the events of the evening.)

But when it came time to open the Bowery to the public, Rosen's camp balked. The eager lines were told by hosts and security guards that "First Show / Last Show" required an RSVP, and that anyone who was not already on the evening's list would need to make an appointment and return at a future date. 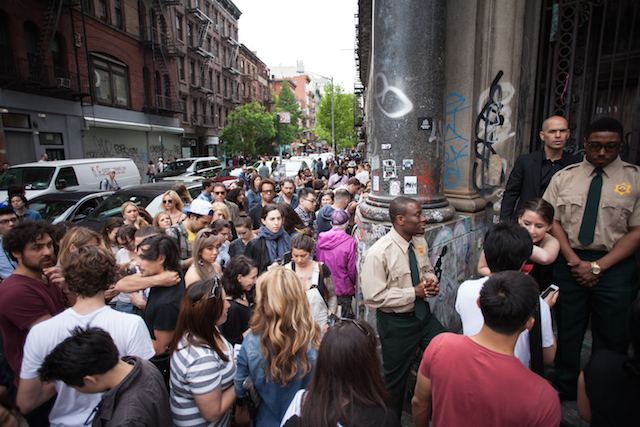 "It's just b.s. This whole crowd turned out for an event they thought they'd have access to," 26-year-old Brooklyn resident Maria Cortorreal said. "This would have been an amazing event for everyone to just finally see what's going on inside." As Cortorreal and others stood outside 190 Bowery, guards pleaded with would-be visitors to disperse and clear the sidewalk, with some yelling that the show was "already over." Pissed off crowd members said they were told by hosts at the building's entrance that the public opening was only an "internet rumor." Shouts of "fascists!" and "this isn't art!" erupted from the group, with the strongest reactions coming from older fans of the building who viewed it as a forbidden wonder for decades.

Maisel purchased 190 Bowery, built in 1899 as the Germania Bank, for $102,000 in 1966 and spent the next half century renovating, working, and raising a family inside its massive space. The photographer rented parts of its interior to artists, including Roy Lichtenstein, while its outer walls were allowed to become a graffiti mecca that only grew in importance (and novelty) as condo developments and shiny new galleries swept across the Bowery. The building was finally sold to Rosen in February for $55 million and is slated to become office space and condos.

"It completely pisses me off and makes me really angry," Cox said of Rosen's plans to privatize the building, "but I figured at least we'll go see one night of how the other half lives. I think the realtors and developers wanted to create a buzz."

As Cox gazed at the building, others arrived with fresh hopes of getting in, and gallery hosts alternated between shouting out instructions to RSVP online for a daytime appointment (First Show / Last Show will be open 12-6 p.m. until May 29th) and letting the few V.I.P.s that had landed spots on the list.

SoHo resident Genevieve Jones was one of the few who did get to peek inside the 190 Bowery gallery, and she described it "a really small space" spread across the first two floors with less than a dozen works in total. "Honestly, I came to see the inside of the building," Jones said.

Asked if he'd follow procedure and RSVP for a chance to visit "First Show / Last Show," Cox shook his head. "I don't like dealing with this type of thing. This is where New York is going. Now it's just going to be more rich assholes."

#190 bowery
#art
#original
Do you know the scoop? Comment below or Send us a Tip