Last week, the internet briefly roused itself from its summertime hibernation when it was reported that you could stay in a jail cell for just $10 a night via AirBNB. The cage, which actually just costs a person $1 a night and is located in Bushwick, is a project by artist Miao Jiaxin—but faster than you can scream "Human-Sized Hamster Wheel," it was removed from AirBNB. There apparently is some serious demand for fantasy jail experiences, so Miao has now posted the listing on his Facebook.

Here are all the relevant details about the cage, which includes quite a lot of rules about how to behave inside: 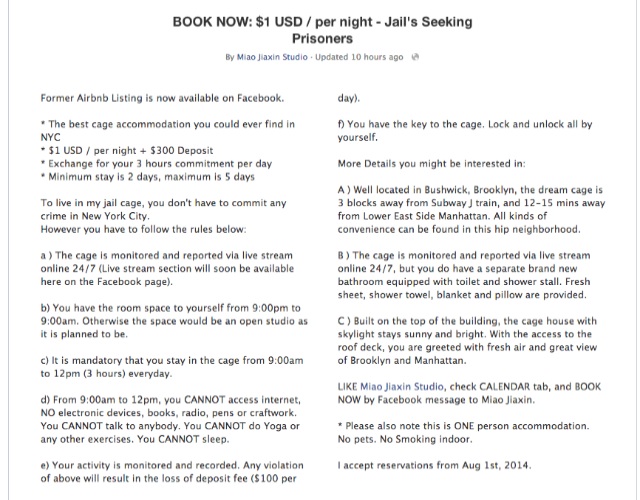 "It’s not for fun," Miao, a Shanghai native who moved to New York 2006, told the Daily News. "It’s for an experience. More like a psychological New York City experience." AirBNB said they took down the listing because it was more of an art project than an accommodation; Miao argued back, "This room has bed, heating, air conditioning, refrigerator, a private full bathroom with shower within the same space. It is a very comfortable accommodation which can be considered as a theme hotel."

It may not be meant for fun ("Everybody is living in a cage," Miao told them, although he also referred to it as a "theme hotel"), but it kind of seems like performance artist Matthew Silver may have been having at least a little fun trying it out in the video below:

#airbnb
#art
#brooklyn
#bushwick
#cage
#jail cell
#miao jiaxin
Do you know the scoop? Comment below or Send us a Tip