The election of Donald Trump sparked a loud reaction from marginalized groups across the board, including for women. Last weekend, a powerful show at Bushwick gallery ArtHelix, dubbed "How Would She Feel?" invited female-identifying artists to create pieces narrating their stories "without the extension or forces of patriarchal systems," according to the curators, in an effort to both honor women and push back against the current political climate.

Brooklyn residents Lamar Robillard and Nicole Callender curated the exhibition, and Robillard told Gothamist he was inspired to do so by the documentary What Happened, Miss Simone? about the life of singer and activist Nina Simone.

"I watched that in June or July of last year and I just felt really moved, like I needed to do something to free her and empower women," Robillard said. So he reached out to Callender, a longtime friend, and the duo decided to work on a show that would create some kind of women's response to our current political state. "[Nina Simone] was a black woman ridiculed for her political voice. We were inspired by her freedom," Callender said. "We wanted to celebrate the women who came after her."

When Donald Trump was elected president, "that was a catalyst," Robillard said. "We knew it was definitely time to take a stand, and to do something to push forward. We felt it was important that women create a psychological response to having Trump in office."

Robillard and Callender started reaching out to artists, some of whom Robillard knew personally and some of whom they found on Instagram. They ended up culling submissions from nine female artists from all over the country, whose works touched on everything from ideas of femininity to racial identity, to the language used to describe Hillary Clinton during the 2016 election. One series of works by artist Patrice Nuelie features abstract representations of vaginas, each one becoming larger and more colorful to represent healing and the highs and lows experienced while self-discovering one's sexuality.

Evolve, by twins Joyce and Jessica Gayo, honor their mother, who opened the first black beauty school in Naples, Florida. The twins attached synthetic braids to photos of women in celebration of their Caribbean, West Indian, and African heritage.

Isis Sade Rivas, an Atlanta-based artist, created a small room for her Acute Woman compilation, for which she held conversations with a number of female artists to get their thoughts on Trump's election and the mind of the female creative, then posted excerpts on self-crafted paper, paired with images of flowers. The piece includes discmen with CDs featuring the actual interviews, so visitors can experience visual and sonic conversations with the women, and Rivas made a book with more excerpts to complete the experience.

And Courtney Loo, a filmmaker and photographer, made a Fish Chips and Chocolate Milk Documentary, which explores what it was like for Loo to grow up as an Asian-American in the 1980s, '90s and early 2000s. The short film is narrated by Loo's mother, and is paired with 35mm photos further exploring the theme. 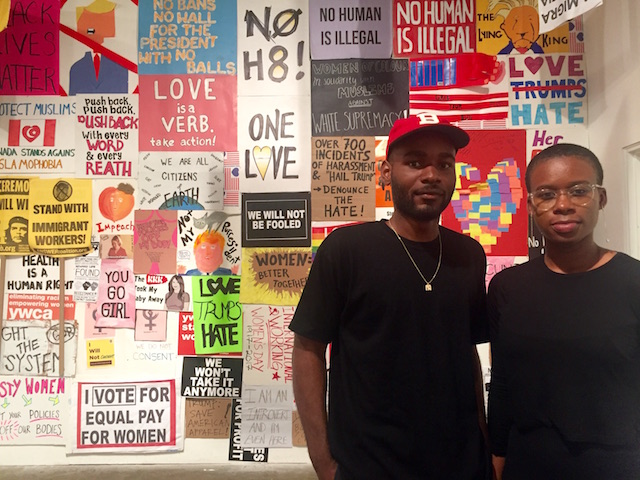 One of the most striking pieces is by Robillard and Callender themselves. They collected signs from anti-Trump and Black Lives Matter protests, posting them from floor-to-ceiling on one of the gallery's walls. "We wanted to show how creative people get when they're in pain," Callender told Gothamist, and though we're fairly familiar with that by now, there is something jarring about seeing them out of context.

It's noteworthy that while all the pieces are critical of Trump, Robillard and Callender say they hoped initially they'd be able to put together a more balanced show. That didn't work out too well. "We tried, but it was really hard to find someone who was pro-Trump," Robillard said.

The bad news is, if you're hoping to see How Would She Feel soon, you're going to have to wait. ArtHelix and curation network SHIM were only able to show the exhibition last weekend, but Robillard and Callender are hoping another gallery will make room for it in the future. If you'd like more information about the show, or the corresponding artists, you can contact Robillard at Amatterofpink@gmail.com and Callender at Calln850@newschool.edu.

#art
#bushwick
#gallery
#how would she feel
#trump
#original
Do you know the scoop? Comment below or Send us a Tip
A new Gothamist is coming! We’ve moved comments over to our beta site. Click here to join the conversation and get a preview of our new website.