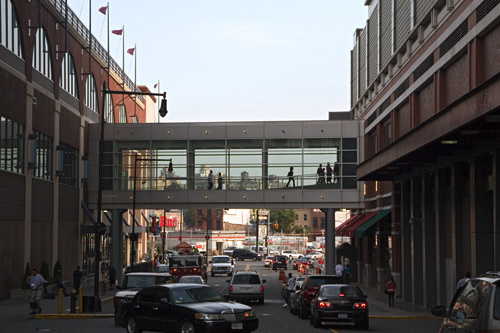 The NY Sun takes a look at the city's skybridges, and their place in our future. While some cities offer the plenty of the structures to their residents (Minneapolis, we're looking at you), they are often only found in parts of the country with extreme hot or cold temperatures. Do our humid summers and frigid winters warrant more indoor walkways?

Apparently we're getting less! A few existing skybridges are now in danger of being torn down as new developments topple them. Here's the endangered list, in no certain order: The one on 24th between Madison and Park risks destruction at the hands of Daniel Libeskind. Another on 24th that connects 200 Fifth Avenue and 1107 Broadway is now at risk because one building will become offices and the other condos. The Sun notes that the 3-story skybridge on 32nd Street between 6th and 7th Avenues (attached to the former Gimbel's building) may be coming down, noting the changes to the nearby Farley Post Office and soon to be destroyed Hotel Pennsylvania. But it seems unlikely to us, as they aren't even on the same block.

New York doesn't just burn skybridges, we also build them. There are some new ones in the works at this very moment, in fact "two of the five ventures bidding on the redevelopment of the MTA-owned rail yards near the Hudson River, between 30th and 33rd streets, have included them in their plans." The idea became popular again post-9/11, as a skybridge could be a helpful escape route. View an entire set of New York's skybridges here, our favorite is on Staple Street.