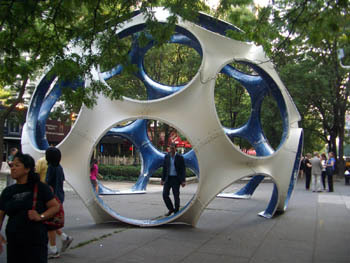 The great porous globe that has suddenly landed among the ivy and trees of verdant LaGuardia Place turns out to be a structural model for a radical type of affordable, prefabricated housing. This single eye-catching installation -- Buckminster Fuller's Fly's Eye Dome -- marks the opening of a a week of Buckminster Fuller celebrations in NYC.

R. Buckminster Fuller (1895-1983), known as "Bucky," was a pathbreaking architect, inventor, and author who believed innovative design could address many of the world's problems. A consummate modernist, he studied the geometries of the universe for architectural inspiration. Time magazine smeared Fuller as "one of the century's great nutjobs," but the Whitney Museum is calling him "one of the great American visionaries of the 20th century." The series of events (which actually extends beyond this week) includes gallery openings, panel sessions, and film screenings hosted by the Buckminster Fuller Institute in collaboration with other organizations including the Center for Architecture (directly across from the dome) and the Max Protech Gallery.

Fuller wrote of the Fly's Eye Dome design in 1983, "The basic hardware components will produce a beautiful, fully equipped, air-deliverable house that weighs and costs about as much as a good automobile." He emphasized the structure's potential to harness passive solar energy and natural wind ventilation. And this before "Green" was in! The habitable version, naturally, offers windows. (Fuller's Dymaxion Car sold separately.)