You could faintly smell it walking down the brilliant, squeaky linoleum hallways where flat-screen televisions played Knicks highlights in perpetual loops and ten gallon hats carrying nine-dollar beers scurried to their seats. Descending the concrete staircase, the odor turned tangy and complex as it mixed with 600 tons of dirt. Sulfur-spewing pyrotechnics shot sparks into the air, the pop country kicked in, and the crowd roared approvingly. The smell, of course, is bull excrement, and it's an essential ingredient in the electric spectacle that is bull riding in Madison Square Garden. Every time it kicked up in the air it begged the question: What city was this again?

Professional Bull Riding, or PBR, considered bull riding's grandest stage, has begun its season at Madison Square Garden for the past six years. Saturday night's event, the second part of a three-event contest, was sold out. It's impossible to peg the average fan. There were the earnest, denim-clad couples with matching bolo ties, overweight men clutching footlongs in Giants jerseys, frat stars in Vineyard Vines button-downs and boat shoes, and one woman, clad almost exclusively in Wrangler, who identified herself as the "barrel racing champion of Long Island."

In a venue used to showcasing $65 million-dollar men, bull riding is a relatively a modest affair. Less than $11 million in prize money is slated to be paid out to the riders this year. Tickets ranged from $15 to $200. Pay $250, and you enjoy the "VIP Experience" of meeting the athletes themselves. Spike Lee's courtside seats don't grant him locker room access.

The sport is simple: riders attempt to stay on the bull for eight seconds without allowing their free hand to touch the animal. PBR likes to point out that "bull riders do not get paid if they don't ride," and the cowboys' salaries are mentioned by the color commentators ad nauseum to drive home the point that these cowboys are all blue collar and working hard for their dream. The commentators themselves are sitting on a giant podium made to look like the grille of a Ford pickup truck. 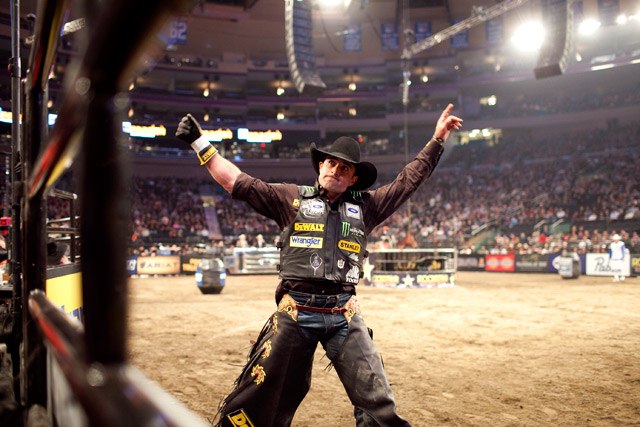 Skeeter Kingsolver is a professional bull rider. Last year, he earned $81,145 for riding 34 bucking bulls for eight seconds apiece, and $81,175 the year before that. The lanky Kansas native has a soft drawl and a wispy, blonde, not-quite goatee. He doesn't know why he was named Skeeter, just that it's always been that way. He is 22, and barely looks 19. "I saw a flyer for bullfighting when I was twelve and I thought it looked like it was something fun to do," Kingsolver explained.

Kingsolver didn't ride Saturday night, as he's been healing from a shoulder injury that required surgery and several months of recuperation. Riders wear a hard protective vest emblazoned in the names of their sponsors, and most, but not all, wear helmets. Despite the long stretches of time that he was laid up, Kingsolver managed to place 30th in the world last year.

"If you don't perform, you get cut pretty quick. I know the danger involved, I've broken both my ankles before, been banged up. But it's what I have to do. It's my job." What would he do if he wasn't doing this? Kingsolver pauses. "I was actually in an episode of House. The one where a bull rider gets hurt, I did some stunts." Would he act full time? "Shit yeah! I get a check for $2,500 every time that thing airs." He turns to an assistant and appears to think out loud. "I need to get my SAG card."

Ryan Dirteater, whose surname seems suspiciously apt ("Spelled just like it sounds.") for a professional cowboy, stayed on his first bull of the night but was bucked off the second. Like Kingsolver, Dirteater rides for Dickies, and despite a career plagued by injuries, Dirteater has managed to earn over $350,000 in five seasons. He'll be 23 in April. "I'm just lucky. I've known I've wanted to do this all my life." Dirteater is exceedingly polite ("Yes sir…No sir.") and barely blinks when speaking. "I've been injured plenty, but I'm just grateful to be here. Getting hurt is just part of the game." 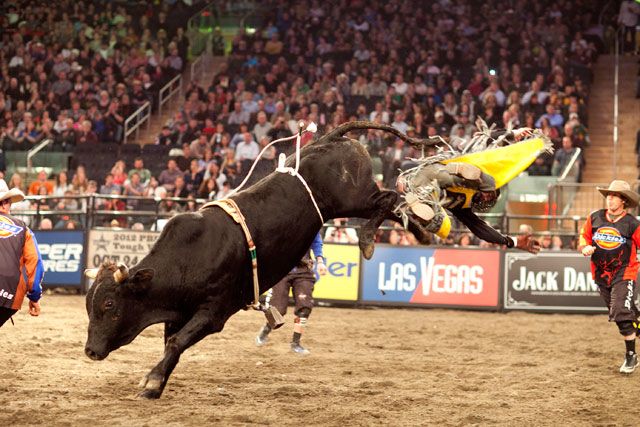 Also part of the game—50% of the game, in fact, are the bulls. With names like Stink Eye, My Space, Bushwhacker, and Cooper Tires Wild & Out, the animals are part stock car, part racehorse, and part yacht for their owners.

PBR boasts that the animals used in the event, around 110 of them for a three-day event, can be worth over $100,000 and refers to them as "animal athletes," and insists that the bulls are "only allowed to travel a maximum of 10 hours a day," which earns them 12-14 hours rest.

In the past, electronic shocks, tail-twisting, and sharp prods have been used on rodeo animals, and animal rights activists' criticism of rodeos stretches back to the 1870s. The cowboy's union, the Professional Rodeo Cowboys Association, has standards for animal welfare but it only oversees around a third of the rodeos that occur in the U.S. The ASPCA's official position states that the organization

is opposed to all rodeo events that involve cruel, painful, stressful and potentially harmful treatment of animals, not only in performance but also in handling, transport and prodding to perform.

An ASPCA spokesperson tells us that there have been no specific complaints regarding this weekend's PBR event.

A common belief is that the animals' testicles are tied together to make the bull buck out of the gate. "It has nothing to do with the genitals," a PBR animal rights document reads. "In fact care is taken to ensure that the genitals are not involved as that would adversely affect the performance of the bulls."

However, PBR acknowledges the use of a flank rope, which is tied tightly around the bull a foot in front of its genitals. "The flank rope is more of an annoyance than anything else, and the bulls will kick their hind legs out at the height of their bucking action in an effort to dislodge it," the document reads. "The flank rope helps create a more uniform, less erratic performance, which helps prevent bulls from injuring themselves." Electric prods are no longer used to provoke the bulls.

Another oft-repeated line is that the bulls are bred to buck. "They know when it's showtime," Kingsolver says. "When that gate opens, they're ready to perform just like we are, and that's exactly what they do." Before the event, the bulls appeared docile and sedate, licking each other and sitting around piles of hay. Once out of the gate, they gave the appearance of being wildly out of control, thick streams of phlegm flying several feet from their nostrils, only to run back obediently into the darkness of the pen several seconds later.

As the color commentators took corny jabs at New York City ("I saw a guy in Times Square holding a sign that said "I need money for weed. He was just Occupying that there sidewalk.") and women with bare midriffs shot Jack Daniels t-shirts into the audience, the bullfighters in the ring remained staid. "My job is protect the riders at all costs," 25-year-old bullfighter Jesse Byrne told us between neon orange sips of a can of Rockstar. "We work as a team to keep the bull moving and monitoring the riding for when he comes off."

Byrne spent most of the night crouched down, batting at the spinning, bucking bulls and occasionally jumping on the fence to avoid their horns. Why bullfighting? "My dad is in the Canadian Professional Rodeo Hall of Fame as a bullfighter, so I'm going into the family business." Isn't his wife worried about him being injured? "She's a barrel racer so she's got a pretty good idea of what I do." 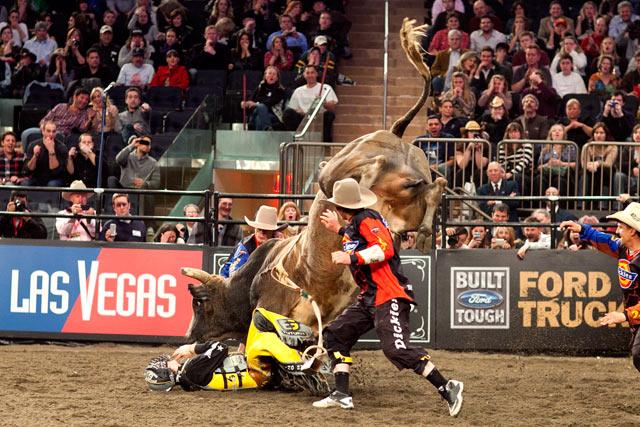 The risks are real. Pistol Robinson, sporting a mustache that would be at home in Williamsburg, was bucked off his bull in the last ride of the night, and had to be carted off the dirt. Robinson waved to the crowd, and he was tweeting soon afterward, but it's unclear if he was seriously injured.*

This is nothing new: the thrill of possible injury seems part of the excitement. Clips of the riders' spills were replayed over and over. And if the bull riding wasn't enough, a cringeworthy jousting match sponsored by the History Channel was there to give you those belly laughs that only seeing someone being struck with a giant wooden pole provide.

A photographer who regularly shoots events at Madison Square Garden told us this was her favorite event of the year. "I mean, there are a million Rangers games and Knicks games, and they're kind of all the same." She nodded to the dirt-covered floor and the three men poised to distract a 2,000 pound bull with a man on his back. "This—I mean, look at it."

*ED: We contacted PBR to confirm Robinson's injuries after the event and received no response, but the organization notes that he'll be recuperating and out of competition for six to nine months. It appears that his right femur and left tibia and fibula were broken. Last night he tweeted, "Thanks to everybody for the support. This is the hardest part of the sport of bullriding. It sure helps knowing people care. #thanksyall"