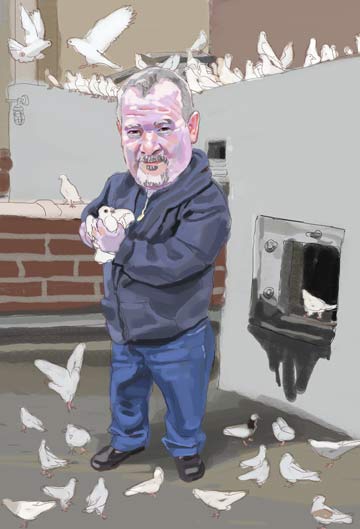 Pigeon keeping and racing has been a part of the city for a while, and finally someone has poured over all the ink that has been somewhat-recently spilled on this other American Pastime. Bed-Stuy Banana's rundown finishes with a link to Overlooked New York, which features profiles on some of the top pigeon keepers in the city. All 40 or older, they each seem to have a long, quirky history with pigeons (not street pigeons, mind you, which they refer to as "rats").

"I’ve had pigeons since I was a kid, but we didn’t have a coop on the roof back then; my mother wouldn’t let us up on the roof. So my brother came home one day with two milk crates, and he manufactured this thing and he put it on the window, and that was our pigeon coop." - Orlando

"Now, there was a pigeon coop up on my roof, and I didn’t know any better, and I went up on the roof, and I seen all these birds inside … and I went inside and I grabbed a bird and I took it downstairs to my mother. Now, the next day, at dinner, I said to my mother, 'What happened to that little bird?” and she said, 'You’re eating it. I made that soup out of it.'"- Victor

The Morning News has a good story from a few years ago about the Brooklyn Pigeon Wars. Brooklyn is home to most of the pigeon keepers, the borough even has its own Pigeon Mumbler. The hobby is a somewhat expensive one (running around $70/week for some), and one would assume a keeper wouldn't make for a great neighbor (though at least one assures that his neighbors don't seem to mind). And if they did mind, there's always the Robo Hawks.

#brooklyn
#coops
#outer boroughs
#pigeon keeping
#pigeon racing
#pigeons
#race
#robo hawk
Do you know the scoop? Comment below or Send us a Tip
A new Gothamist is coming! We’ve moved comments over to our beta site. Click here to join the conversation and get a preview of our new website.